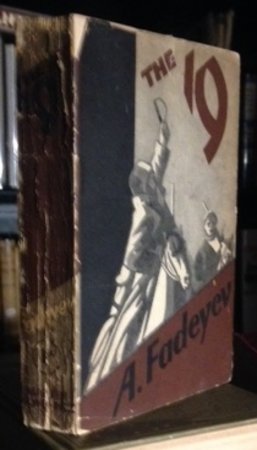 THE NINETEEN. Translated from the Russian by R. D. Charques.

London: Martin Lawrence, 1929. Octavo, viii, 293, [3]. Plain card sides with attached pictorial dust jacket. Spine worn, with chips to tips, vertical creases, wear to joints; corner chip and one inch tear to front panel; soiling to rear panel; rear inner hinge repaired with rice paper; just good externally, VG clean and unworn internally, no previous owner names. An uncommon edition of this "first peasant epic of New Russia, [which] deals with the struggle against ignorance and prejudice in a Soviet Village by the Volga." Fadeyev, who joined the Bolsheviks in 1918 and fought in the Russian Civil War, was a staunch Stalinist. He once described Stalin as "the greatest humanist the world has ever known" [!!]. Small wonder he succumbed to alcoholism and suicide. Titled RAZGROM in Russian, this novel was also published in English as THE ROUT.