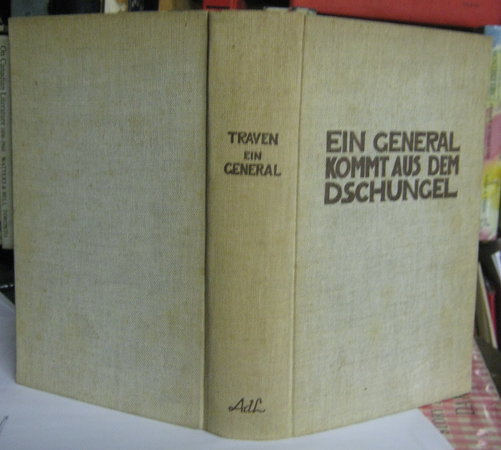 Amsterdam: Allert de Lange, 1940. Octavo, natural linen cloth lettered in brown. (416) pp. Printed by the Hungaria Buchdruckerei in Budapest. Some tanning and light foxing to covers; red topstain sunned; yellowing to fore edges; else a VG clean, tight and unworn jacketless copy. The sixth and last of the "Jungle" novels about the Mexican Revolution, and probably the scarcest in the original German first edition. Traven published all the rest of them in Berlin and Zurich, but he didn't want this one to be published under the Nazis, who had in any event had banned his books (Traven was a socialist). His usual Zurich publisher had moved to the centre and declined to publish it, so he found a publisher in Amsterdam; the book was published only months before the Nazi invasion of 10 May, 1940, and copies of this edition are said to have been mostly destroyed. The actual first edition was a Swedish translation from the German typescript, published Stockholm, 1939. First edition in English was London, 1954, as THE GENERAL FROM THE JUNGLE. Treverton 877.