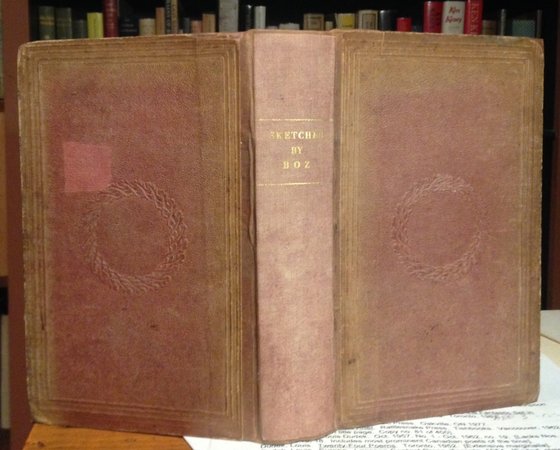 SKETCHES BY BOZ: Illustrative of Every-Day Life, and Every-Day People. The Second Series. Complete in One Volume.

London: John Macrone, 1837 [for 1836]. Original salmon (now more reddish-brown) morocco grain cloth, bordered and decorated in blind on the sides; modern rebacking in light brown cloth titled and ruled in gilt, resewn, cloth tape at inner edge of frontisiece and vignette title Original yellow endpapers, cloth inner hinges. pp [2, binder's blank], [i-x] ([vi-vii] misnumbered ii-iii and [x] misnumbered viii), [1-3] 4-377 [378, blank], [19, December, 1836, ads], [1, blank], [2, binder's blank] + frontispiece and engraved title (dated 1836) and 8 other plates by George Cruikshank (complete). Frontispiece in this copy is "Seven Dials". Walter E. Smith, Dickens in Original Cloth, Part I, number 2, noting "it does not appear possible to associate definitely early or late copies totally with states of the spine..., endpapers (pale yellow or blue), location of the plates and whether or not they contain the volume number. the absence or presence of the list of illustrations, and internal flaws." This copy has a two plates in different places than the order listed in Smith, it does not contain the list of illustrations at the end of the Contents leaf (most copies do have it), all of the plates have Vol. III p - " in the captions, and it does not have the blind-stamped binder's name on front cover. The book was first published 17 December, 1836. In the ads at rear is advertized " A novel by 'Boz.' GABRIEL VARDON. By Charles Dickens", which was published as BARNABY RUDGE. Margins of covers faded to tan, as often; postage stamp-size area of back cover is lighter, pink; yellowing to page edges; frontispiece and vignette title have foxing and darkening, less pronounced but present on the other plates; scattered light soiling and tan spots in text, offsetting to pages adjacent to the plates; two damp spots at lower margin of front endpapers and damp stain to lower inch of rear endpapers; pencil ownership signature twice; in all a VG unworn copy of Charles Dickens' second book, one of his scarcest in original cloth, much scarcer than the 1836 two volume First Series.; Octavo