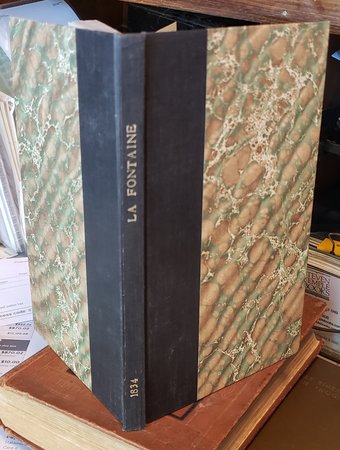 Montreal: Ludger Duvernay, Imprimerie de las Minerve, 1834. 12mo. pp 75. In modern quarter cloth and marbled boards, retaining original sewing, remains of wrapper showing at inner margins of first and last page. A fine copy. "He was elected to the [Quebec] House of Assemly in 1830 and became an ardent supporter of the popular party. In the pamphlet Les deus girouettes...he answered Dominique and Charles Mondelet...who had denounced the Ninety-Two Resolutions as traitorous and revolutionary, by insisting that those resolutions gave a fair account of colonial grievances and by pointing out that the demand for an elective legislative council had been made by Charles Mondelet himself in 1826. " - Story. Lafontaine, representing the 4th riding of York County, Canada West 1841-44. insisted on speaking French in the Assembly and was instrumental in making it become legal to do so. Partnering with Robert Baldwin, they became the leaders of the reformers of Canada West. Stephen Leacock wrote a small biography of Lafontaine for the Makers of Canada series. A giroutte is a weather vane, or a person who changes his mind often. TPL 1841.