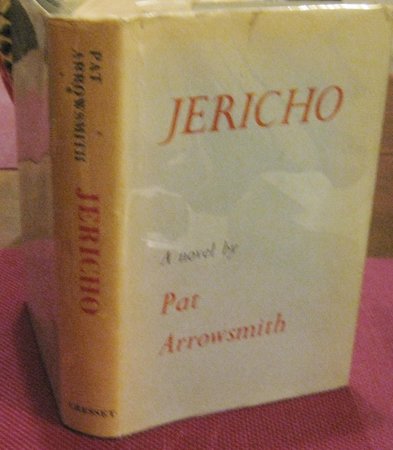 London: Cresset Press, 1965. Black boards. Light yellowing to page edges, very nearly fine otherwise, no owner names. Pale blue price-clipped jacket is tanned on spine, lesser tanning to flap folds and margins of panels; short tear to front panel; VG otherwise. "Miss Pat Arrowsmith, a pacifist and convinced believer in non-violent resistance, is well known for the part she has played in the Campaign for Nuclear Disarmament and as a leading member of the Direct Action Committee against Nuclear War, and the Committee of 100. For these activities she has undergone several gaol sentences and this book was written during a recent spell of six month in Holloway prison. In fictional form JERICHO describes a campaign of demonstation and picketing by a group of supporters of nuclear disarmament at an atomic weapons establishment." - jacket.; Octavo