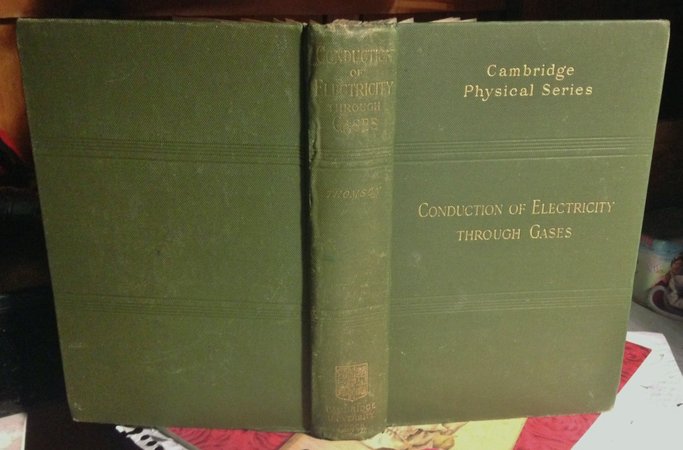 CONDUCTION OF ELECTRICITY THROUGH GASES

Cambridge, England: Cambridge University Press, 1903. Octavo, original olive cloth gilt lettered. pp (viii), 566, (2); diagrams and photos in text; indexed. Light rubbing to joints and spine tips; light spotting to spine, gilt spine lettering a little dulled but clear; tanning to page edges, light yellowing to endpapers; front free endpaper has old light ink prices in upper fore corner, a Jan., 1904, ink ownership name and a later owner's 1954 ink inscription; small 1904 owner's name in ink at top of half-title leaf, and he has made a one line ink note to the bottom margin of p. 7; in all, a VG unworn and tight copy, hinges not cracked. Thomson won the 1906 Nobel Prize for physics "in recognition of the great merits of his theoretical and experimental investigations on the conduction of electricity by gases.". Sir Joseph had experimentally demonstrated the existence of the electron, as well as the existence of sub-atomic particles in general, advancing the "plum pudding" model of the atom, that the "corpuscles" (electrons) he discovered floated in a sea of positive charge (a model that went out with his one-time student Rutherford's discovery of the positively charged nucleus.) He also invented the mass spectrometer and discovered the concept of isotopes. Thomson was a gifted teacher as well, seven of his research assistants as well as his own son won their own Nobel Prizes. "I have endeavored in this work to develop the view that the conduction of electricity through gases is due to the presence in the gas of small particles charged with electricity, called ions, which under the influence of electric forces move from one part of the gas to another." - opening of Preface. PMM 386d, under the heading "Cathode Rays". "Thomson had provided experimental proof of the theoretical speculation of Lorenz (378). In doing so, he had revolutionized the science of physics. The 'indescructible' atom was no more and it began to seen likely that the common constituent of all matter was a form of energy. Thomson's discovery opened up new fields in almost every branch of physics and initiated such departments as thermionics and photo-electricity."- PMM. One of the most important published science books of the 20th century. Note: pp vii-viii (Contents leaf) and pp 545-46 (Supplementary Notes, Chapter I) are cancels. Page 545 is hand numbered. Presumably, a second state.