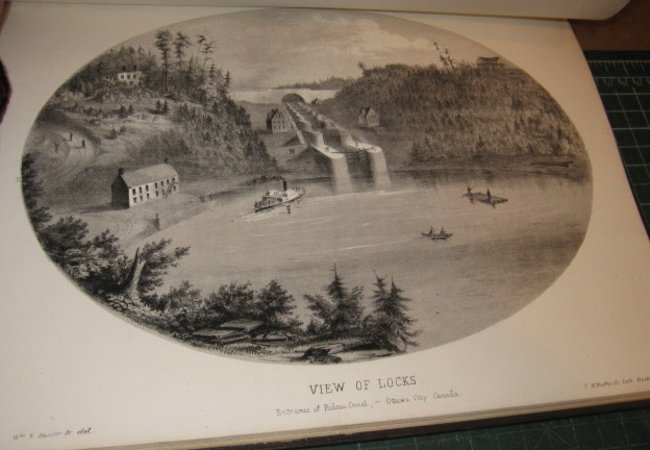 HUNTER'S OTTAWA SCENERY, in the Vicinity of Ottawa City, Canada

Ottawa City, Canada West, 1855 (for 1856): William S. Hunter, Jr, 1856. Second edition. Folio, 33.5 cm, original dark brown cloth decorated in blind, gilt lettered within a gilt circle on front cover, all edges gilt. pp 19 text (in double columns) + frontispiece and illustrated title + 13 other lithographed plates (mostly tinted) with tissue guards + folding map. Small cloth chips to spine tips, minor damp spotting to covers; small ink blot to fore edge of tissue guard at title leaf, map creased but not torn, small evidence of removed bookplate inside front cover, else a fine, lovely copy, text and plates very clean, no foxing, hinges and joints not cracked, no owner names, plates a clear strike. TPL 3563, Lande 1861, Sabin 33937. The lithographs were from Hunter's own drawings and were printed in Boston by J.H. Bufford, who also worked with Nathaniel Currier. "Probably the first book to include lithographs drawn by Winslow Homer, who was apprenticed to Bufford's of Boston at the relatively late age of eighteen, for a period of two years. The present work includes the apprentice's first substantial published lithograph (the third plate, View of the Locks, Entrance of Rideau Canal) which is initialed by Homer, and the large title vignette and five other plates that are attributable to him on grounds of style". - Tatham, Winslow Homer and the Printed Book (1992). " 'Ottawa scenery' first appeared in ... a small initial printing of ... a few hundred copies. A second edition ... still carrying the year 1855 on its title page, followed, probably in mid-1856... In the second edition the letterpress has been entirely reset, though the contents of Hunter's essay are virtually the same. In the first edition the signature marks on the gatherings of pages are numerals; in the second edition they are letters. Hunter altered the folding map for the second edition chiefly to show additional rail lines around Chicago. Bufford's shop redrew three of the lithographic views for the second edition. The need for a second edition seems to have arisen in the spring of 1856, when the Canadian Legislative Assembly ordered 140 copies of the book, one for each of its members. Presumably this was to inform the legislators about the town that had just become a contender in the consideration of sites for the new capitol. Because Hunter had apparently not foreseen a need for a second printing, he had made no arrangements to keep standing either the type or the stones from which the first edition had been printed." - Tatham. The plates include: (1) Bird's Eye View of Chaudière Falls; (2) Rideau Falls; (3) View of Locks; (4) View from Barrack Hill - Looking Down the Ottawa; (5) View from Barrack Hill; (6) Junction of the Gatineau with the Ottawa river; (7) The Approach of the Suspension Bridge; (8) Suspension Bridge over Chaudière Falls; (9) The Big Kettle; (10) A Portion of the Chaudière Falls, from the North; (11) The Chasm, Chaudière Falls; (12) View from Interior of Chasm; (13) Timber Slide; (14) Natural Curiosity Ottawa River. An excellent copy of the first, largest, and best view book of Canadian artist and designer William Stanley Hunter, Jr.