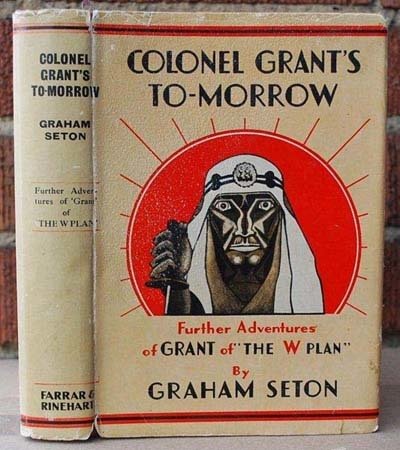 New York: Farrar & Rinehart, 1932. Octavo, tan cloth stamped in red, red top page edges. Small shallow dents to upper and lower edge of front cover; one inch tear to upper inner corner of half-title leaf from careless opening (neatly repaired); else fine, no owner names. The red and black on cream dust jacket has small corner chips and mild rubbing to spine ends; one inch split to lower front spine folds; light rubbing to front spine folds; small edge tears to panels; some crackling to the surface gloss on the front panel; VG otherwise, colours bright, flap price intact, shows well. "Further Adventures of Grant of 'The W Plan' ". Hubin ll p. 730. A tale of murder, espionage, and romance among the Arabs in Northern Africa. Seton Hutchinson, a Scottish military man and author who gained recognition for his tactical innovations in WWI, and was the driving force behind the creation of the Machine Gun Corps, was also a far right fascist. He founded and was active in a number of fascist parties, was an admirer of Hitler, and was in the pay of the Nazis as a publicist for a while.