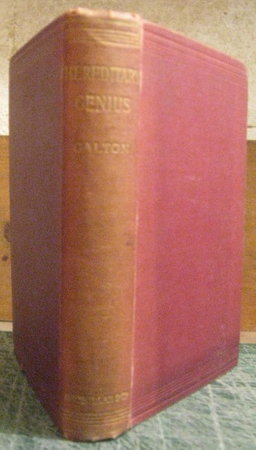 HEREDITARY GENIUS: An inquiry into its laws and consequences

London: Macmillan, 1892. Second edition, with slight corrections, but adding a new 20 page author Preface (first edition was in 1869). Octavo, maroon cloth, black endpapers. pp (xxx), (380), (4, ads). Note: the title leaf is a cancel. Book a little leaned, with small nicks to ends of lightly sunned spine; cracked inner hinge neatly repaired with rice paper coloured to match the endpapers; small spots to verso of front free endpaper; else a VG clean, tight and unworn copy, no owner names. Galton was Charles Darwin's cousin, the originator of eugenic studies, and the pioneer of the classification of finger-prints for identification purposes. "The method used in Hereditary Genius has been described as the first example of historiometry. To bolster these results, and to attempt to make a distinction between 'nature' and 'nurture' (he was the first to apply this phrase to the topic), he devised a questionnaire that he sent out to 190 Fellows of the Royal Society. He tabulated characteristics of their families, such as birth order and the occupation and race of their parents. He attempted to discover whether their interest in science was 'innate' or due to the encouragements of others. The studies were published as a book, English men of science: their nature and nurture, in 1874. In the end, it promoted the nature versus nurture question, though it did not settle it, and provided some fascinating data on the sociology of scientists of the time." - Wikipedia. 1.5 kg parcel