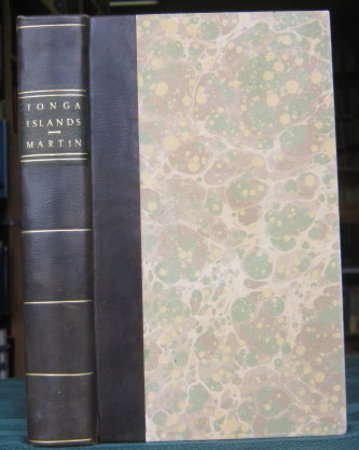 AN ACCOUNT OF THE NATIVES OF THE TONGA ISLANDS, in the South Pacific Ocean, compiled and arranged from the extensive communication of Mr. William Mariner, several years resident in those islands, by John Martin

Boston: Charles Ewer, 1820. Stated First American Edition. Octavo, pp (xxx), (31)-461 + frontispiece portrait (Mr Mariner in the Costume of the Tonga Islands) (lacking the tissue guard) and large folding map at p. (31). Four pages of words and music at rear. With the Preface to the second London edition (1818, with additions). Modern binding of quarter calf with spine label and gilt rules, marbled boards, new endpapers. Ink digits to upper outer corner of title page; yellowing and foxing to frontispiece and early leaves and to leaves adjacent to the folding map, only scattered foxing in text, text mostly without any foxing; creased nicks to upper edge of a few leaves at rear and a few small corner creases; externally fine, internally VG. First published in a two volume format by John Murray, London, 1818. This American edition doesn't have the Tongan grammar and vocabulary found in the London edition. "Mariner set sail in 1805 on a voyage to South America and the South Seas with two purposes -- whaling and attacking Spanish shipping. the crew mutinied in the Tonga Islands, but were murdered by the natives. Young Mariner was fortunate in being taken prisoner and adopted as the King's son. His work contains a very interesting account of contemporary life in Tonga, of the customs of the inhabitants and their inter-island wars and examples of Tonga songs and music...considered the best report of Tongan life and culture before the arrival of Christianity." - Hill