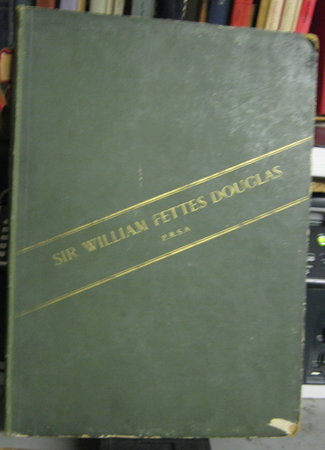 EIGHT PHOTOGRAVURES FROM THE WORKS OF WILLIAM FETTES DOUGLAS, P.R.S.A. By Messrs. Boussod, Valadon and Company. With a portrait after George Reid, R.S.A. And a critical sketch by John M. Gray

Edinburgh: Constable, for the Royal Society for Promotion of the Fine Arts in Scotland, 1885. Folio, 43 cm. Original green boards, cover titled and ruled in gilt, light green endpapers, title page printed in red and black. pp (4), (13, text), (4) + frontispiece and 8 other plates, all with tissue guards. Boards have wear along edges and outer corners; foxing in text, blank versos of plates, and in some plate margins but not in the images; tissue guards yellowed, with some foxing; else a VG clean and tight copy, no owner names. High quality photogravures by Goupil & Co. William Fettes Douglas (1822-91) was a Scottish painter who in 1877 was appointed Director of the National Galleries of Scotland and in 1882 became President of the Royal Scottish Academy. The pictures are Stonehaven Harbour (especially nice harbour view), The False Astrologer (old books stacked and tumbling, stuffed alligator hanging from the ceiling), Summons to the Tribunal (more stacked and tumbling old books), Hudibras & Ralph Visiting the Astrologer, The Spell (a priest practicing black magic), The Antiquary and Lovel (yet more books being abused in the study), The Whisper (juicy gossip), and A Fishing Village. Douglas was interested in astrology and alchemy and was an antiquary and bibliophile. Note: 1.5 kg parcel, extra shipping will be required.