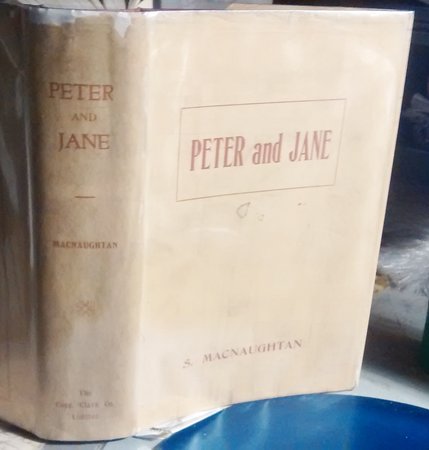 PETER AND JANE, or the missing heir

Toronto: Copp Clark, 1911. Octavo, maroon cloth gilt. pp (8), (312). Ink owner name at front, else fine. In the rare dust jacket (cream lettered in maroon, non-pictorial), which is a bit dusty, with small chips at head of spine; small chip and creased tears to rear panel; VG otherwise. Made from UK (Methuen, 1911) sheets. Partially set in Argentina. Some criminous interest (detective), though not in Hubin. Macnaughtan was "Born in Scotland, one of eight children of an upper-middle-class family in Renfrewshire, and educated by German and English governesses, she travelled in the Americas, the Near East and India. She nursed during the Boer and First World Wars and was the author of fourteen volumes of intelligent, humorous, mildly feminist fiction, often set in high society, between 1898 and 1916." - Oxford Companion to Edwardian literature. ; Octavo