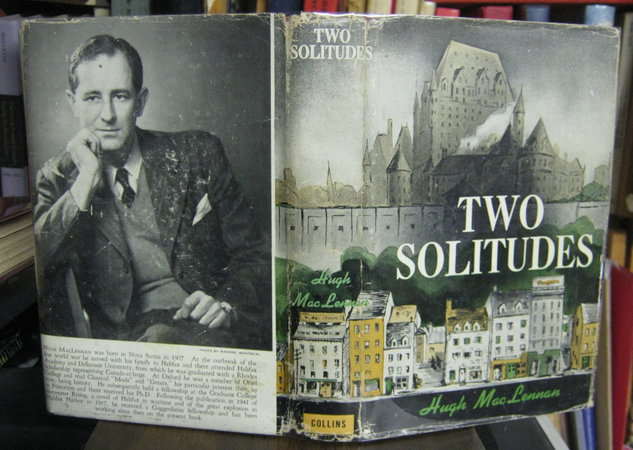 Toronto: Collins, 1945. Octavo, maroon cloth, spine stamped in silver. pp (x), 370, (4). Spine slightly darkened, and a little faded at foot; faint spotting to front cover; newspaper clippiings pasted to front pastedown have caused offset yellowing to the free endpaper, which also has the red pencil ownership of Ward Caldbick; usual yellowing to page edges; else a VG copy. The second issue dust jacket, supplied from another copy, has nicks, tiny chips, rubbing and short tears, to spine ends; light rubbing to spine and flap folds; short tear and small chips to outer corners; VG otherwise, still attractive, flap price intact. Accompanied by a number of newspaper clippings pertaining to MacLennan. SIGNED BY THE AUTHOR on the title page "Hommage de l'auteur - Hugh MacLenann 1980". The winner of the 1945 Governor-General's Award for Fiction, MacLennan's first (of five) such prizes. One of the more important postwar Canadian novels, the title itself having become a common characterization of French-English relations in Canada.. The true first is the US edition (17 Jan., 1945), and the real thing is rather scarce. Almost all of the so-called firsts (of the US edition) offered on the internet every day are actually book club editions. This Canadian edition (printed in Canada) followed later, in March, I believe, and was made from American plates. Scarce on the market signed. ; Signed by Author