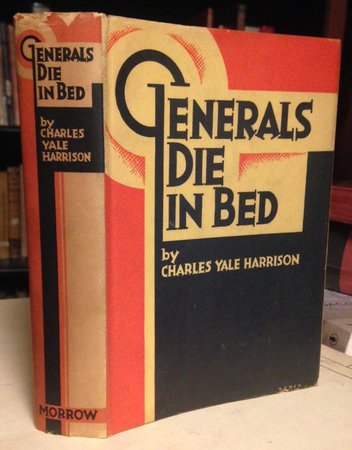 New York: Morrow, 1930. Tan cloth lettered in red, black on white illustrated page edges, black top page edges. pp [14], 269, [5]. Yellowing and slight foxing to page edges, else fine. The striking yellow, black & red non-pictorial Art Deco jacket (by Wenck) has tiny chips to head of very lightly darkened spine; small narrow rubbed spot to rear spine fold; tiny chips to lower edge of front panel and outer corners; yellow rear panel has a 1 cm tear at bottom, minor dust soiling; else fine. First published earlier in 1930 by a small British publisher; Morrow having previously rejected the manuscript, ended up reprinting it a few times. This powerful tale is the most important Canadian World War I novel and no doubt one of the top ten WWI novels. Harrison was born in Philadelphia and by age sixteen was working for The Montreal Star. He enlisted with the Royal Montreal Regiment and was a machine-gunner in Belgium and France, wounded at Amiens in 1918, after which he returned to Montreal for a while before moving on to New York. The novel was praised by Ford Madox Ford, and in its partial appearance in magazines, including German ones, may have influenced Remarque in the writing of ALL QUIET ON THE WESTERN FRONT. "The story of the looting of Arras by Canadian troops and their conflict with the English Military Police is told for the first time. But piquant as are these and many other revelations of the realities of war in and behind the lines, the real quality of the work lies in the exquisite, and withal unselfconsciousness, expression of the beauty and graciousness of human relationships, however startling and unorthodox, amid the foulness and brutality of that inferno." - jacket flap. See the two columns about Harrison in Toye, Oxford Companion to CanLit. Now quite scarce on the market in any sort of dust jacket, especially one so nice.; Octavo.