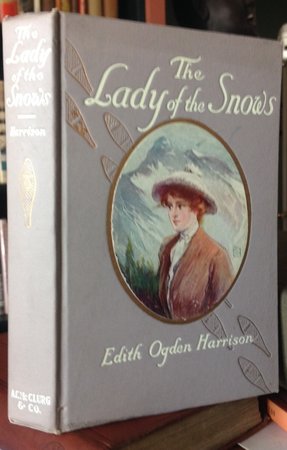 THE LADY OF THE SNOWS: a novel. With illustrations and decorations by J. Allen St. John

Chicago: McClurg, 1912. Octavo, grey decorated cloth stamped in gilt, lettered in white, with oval pictorial label on front cover. pp 290 + 4 colour plates. Numerous vignette illustrations in text. Yellowing and light foxing to page edges, else a fine copy of this handsome book, with nice illustrated by a noted American illustrator (of Edgar Rice Burroughs, for instance). RCMP interest. Catholic Church. Indians. Basis of a 1915 film. "English society girl Helen Mason refuses to marry Charlton Templeton (Richard C. Travers) because he can't support her in the style to which she is accustomed. Instead she marries a member of the Canadian Parliament. Templeton then finds out that his mother's former suitor has left a fortune to someone named Patricia Sutherland. There is a catch -- she must wed Templeton to get the money. Since he is still hurting after his breakup with Helen, Templeton decides to go to Canada and marry Patricia for the money she will inherit. When he arrives, the girl isn't there, but her uncle gets him a job with the Northwest Mounted Police. He proves to be a brave and honorable Mountie, and along the way he meets Gloria, also known as the Lady of the Snows (Edna Mayo). She is a secret service agent and Templeton falls in love with her. Helen, meanwhile, has realized that she really loved Templeton after all and she leaves her husband to reconcile with him. Templeton, however, wants nothing to do with her. Vindictively, she lets Gloria know that Templeton is supposed to marry Patricia Sutherland and then tells Patricia's uncle that he is in love with someone else. But the truth is that Gloria and Patricia are one in the same, so Templeton is free to marry the girl he loves." - NY Times film review. US author (wife of five-time mayor of Chicago, collaborator with L. Frank Baum). Western Canada setting. Not in Peel, but should be.