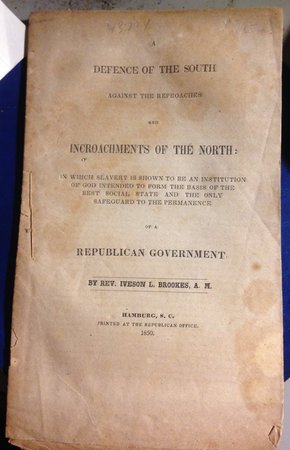 A DEFENSE OF THE SOUTH AGAINST THE REPROACHES AND ENCROACHMENTS OF THE NORTH: in which slavery is shown to be an institution of God intended to form the basis of the best social state and the only safeguard to the permanence of a republican government

Hamburg, South Carolina: Printed at the Republican Office, 1850. Octavo, pp (2), 48, stitched in self wrappers. Some foxing and yellowing; small chips to lower outer corners; soft creases; else a VG clean, unworn and largely unopened copy. The bulk of the pamphlet reprints his lengthy letter to The Christian Review headed "Woodville, near Hamburg, S.C. February 20, 1849". He is responding to an article in the January issue urging the prohibition of slavery in the new territories taken from Mexico. He correctly argues that the Bible condones slavery. "Iveson Lewis Brookes, teacher, Baptist minister, and planter, was born in Rockingham County, N.C. Brookes, a 1819 graduate of the University of North Carolina, Chapel Hill, N.C., amassed, through marriage and purchase, considerable holdings of land and slaves in Jasper and Jones counties in Georgia and Edgefield County and other locations in South Carolina. He also worked in schools for much of his life (teacher at Greensboro Academy, Greensboro, N.C., 1819; rector of Eatonton Academy, Eatonton, Ga., 1820s; principal of Penfield Female Academy, Penfield, Ga., 1840s), employing overseers to manage his plantations while he taught and preached at various Baptist churches. He was also active in national and local Baptist affairs and was a staunch defender of slavery." - University of North Carolina, introduction the Brookes papers collection at UNC. Hamburg, S.C., was a small all-black community across the Savannah River from Augusta, GA. It was the scene of white on black violence in 1876 during Reconstruction ("The Hamburg Massacre"). The last residents of the town left in 1929 and there are no visible remains of the community today. This is one of its earliest imprints. Note: lighter parcel, any default postage rate may be reduced.