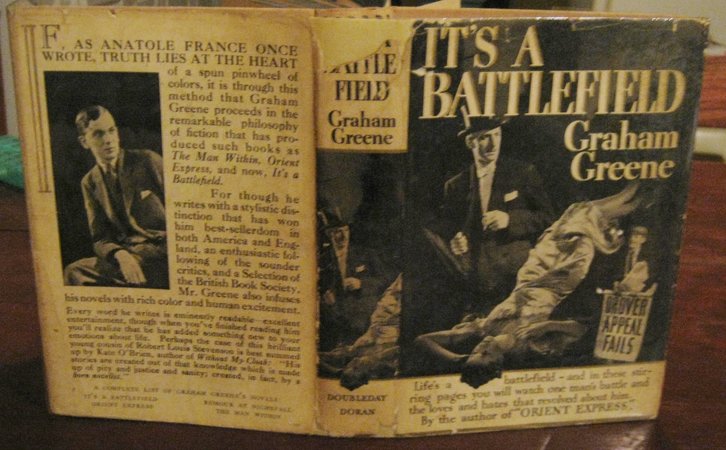 Garden City, New York: Doubleday, Doran, 1934. Light brown cloth, black cross hatch spine decoration, black top page edges. Spine has a small hole to rear joint and a 2 cm narrow black streak between two of the diagonal lines of the spine decoration; yellowing to fore edges; Aug, 1935, ink gift inscription on front free endpaper; a clean, tight and unworn near fine copy otherwise. The supplied photographic dust jacket, black on pale gold; has a large chip and short creased tear at head of spine with loss ot "It's A" and part of "Battle"; nicks and small corner chips at foot of spine (no lettering affected); price-clipped; edge nicks to panels; else a VG example, still attractive. Wobbe A6a notes that in this, his first overtly political novel and not one of his "entertainments", Greene begins to develope the cinematic techniques which were a feature of much of his later writing. He also notes that, for a time, the text was changed after the 1934 UK first edition, and including this first American edition. Despite the cinematic technique, the novel has never been the basis of a film. The plot involves a man, a Communist, who stabs a man, a police officer, about to attack his wife. The character Surrogate was inspired by John Middleton Murry and Lady Caroline Bury by Lady Ottoline Morrell. A scarce edtion, especially in any sort of jacket; only 1960 copies were sold.