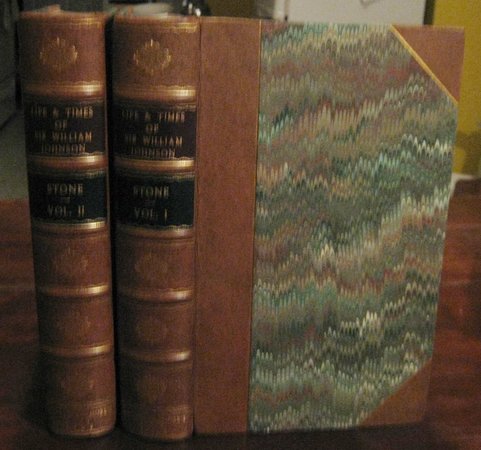 Albany (New York): J. Munsell, 1865. Two volumes, tall octavo. pp (viii), (v)-(xvi), (9)-555 + frontispiece portrait with tissue guard; (xvi), 544. Index. Newly rebound in half tan calf and marbled boards, spines with morocco labels, raised bands, gilt decoration and lettering. New endpapers but original endpapers front and rear preserved and bound in. Light foxing mainly early and late; tissue guard browned; faint damp spot to bottom margin of frontispiece; corner crease to early leaves of volume I; text is otherwise quite clean and unworn. MILLARD FILLMORE'S COPY, with his ink signature at top of each title page "Millard Fillmore/ Feby. 15. 1865. A. [or O.]". >>>Millard Fillmore (1800-74) was the 13th President of the United States. He was Zachary Taylor's Vice President, becoming President 9 July, 1850, after Taylor's death and continuing in that office until 04 March, 1853. Fillmore was the last Whig President. He was a conservative Whig and a moderate opponent of slavery, an issue on the boil during his presidency. He saw through the Compromise of 1850. He sought re-election but was not nominated by the party, which in any event broke up in 1854-56. Fillmore then joined the American Party, the political arm of the "Know-Nothing" movement, a nativist anti-Catholic, anti-immigrant party, though he was not himself anti-Catholic. He was the American Party candidate for President in 1856, but finished third. A lawyer from Western New York, Fillmore was one of the founders of the University at Buffalo. He was a great reader and avid book collector who established the first White House library, taking his large collection home to Buffalo after leaving office. His son sold off the books after his death in 1874. During the Civil War, he denounced secession and supported the Union war effort, but was sharply critical of Lincoln's war policies and supported McClellan in the election of 1864. >>>Sir William Johnson (c1715-1774) was an Anglo-Irish official of the British Empire who as a young man moved to New York the manage his uncle's estate in Mohawk country. He learned the language and customs and was appointed British agent to the Iroquois and then British Superintendent of Indian Affairs for the northern colonies from 1756-74. He commanded Iroquois and colonial militia in the French and Indian War and played an important role in the British victory at the Battle of Lake George in 1755 and he captured Fort Niagara from the French in 1759. Sir William worked hard to keep the Indians loyal to Britain. He accompanied General Jeffry Amherst to capture Montreal in 1760. He had three children with Elizabeth Brant, a Mohawk woman, and in 1759 entered into a common law relationship with Mary Brant, Joseph Brant's older sister. They remained together until the end of his life and had eight children. By this "marriage" he was adopted as a Mohawk chief. Johnson was the third largest land owner in British America. The present work was the first biography of Sir William. There is a good article on him in the Dictionary of Canadian Biography. >>> A nice copy of a very interesting New York book with an excellent New York provenance. Note: 2.5 kg parcel, extra shipping may be required.