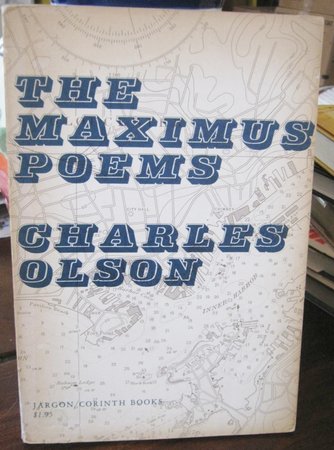 Edition: First of this edition

New York: Jargon / Corinth Books, 1960. The correct first printing, with $1.95 cover price (copies with a $2.50 price are second printings, 1964). Tall octavo, card covers. pp (6), 160, [2]. Yellowing to page edges, covers, and spine, as often; small corner crease to three leaves; scattered foxing spots; VG otherwise. Inscribed by Olson to the wife of a noted Canadian fine printer "for you, Charles" ["you" is underlined]. The inscription has blotted a little onto the inside of the front cover and the inscribee's maiden name is in ink at top of title page. She did some babysitting for Robert Creeley when he was at the University of British Columbia. This combined edition issued as Jargon #24. There were only 101 copies in hardcover. The poems were originally published in limited editions in 1953 and 1956. Olson's master work and one of the most important collections of postwar American poetry.