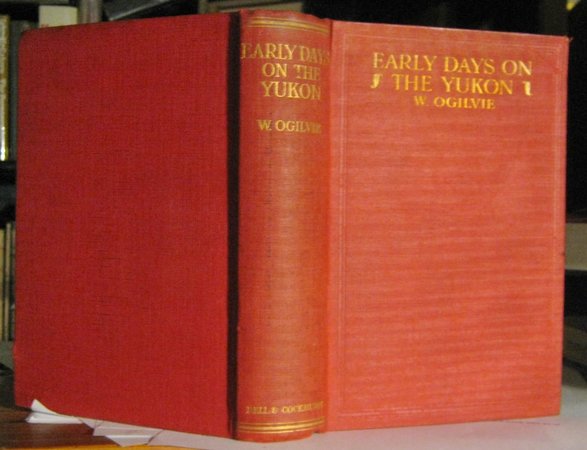 EARLY DAYS ON THE YUKON & The Story of Its Gold Finds

London, New York, & Toronto: John Lane, The Bodley Head / John Lane Comapany / Bell & Cockburn, 1913. Original red cloth gilt. Octavo. pp xii, 306, (2) + frontispiece portrait and 31 plates. pp 302-06 are an appendix, "Present Conditions", by Dr. Alfred Thompson. Soft corner crease to front cover, spine lightly darkened, else a VG+ bright and tight copy, no owner names. "William Ogilvie, FRGS, was a Canadian Dominion land surveyor, explorer and Commissioner of the Yukon Territory. He was responsible for numerous surveys from the 1870s to the 1890s, mainly in the Prairie Provinces. From 1887 to 1889, Ogilvie was involved in George Mercer Dawson's exploration and survey expedition in what later became the Yukon Territory. He surveyed the Chilkoot Pass, the Yukon and Porcupine rivers. Ogilvie established the location of the boundary between the Yukon and Alaska on the 141st meridian west. During the Klondike Gold Rush, he surveyed the townsite of Dawson City and was responsible for settling many disputes between miners. Ogilvie became the Yukon's second Commissioner in 1898 at the height of the gold rush, and resigned because of ill-health in 1901." - Wikipedia, " "One of the most valuable works on the gold rush, Ogilvie, an official Canadian surveyor, went to Dyea in 1887. with Capt. William Moore. he explored White Pass. met McQuesten and Harper on the Yukon. His story of the discovery of gold comes from participation". Ricks p164.