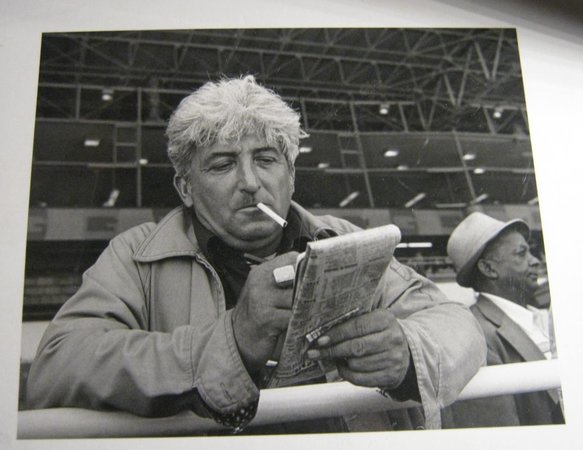 Glossy photo of Jack at the track

2002. Image size 7.25 X 11 inches on 11 x 14 sheet. Jack Micheline at Golden Gate Fields race track, 1981, Number 1 of 2 , signed and numbered in pencil on verso by the photographer Christopher Felver. Jack is studying the racing form, unlit cigarette in his mouth. Fine. Christopher Felver's work has been exhibited internationally with solo exhibitions at many important museums and institutions. Best known for his black & white photos of famous writers, musicians and artists, especially of the beat era. Jack Micheline (1929-1998), born in the Bronx as Harold Martin Silver, was an American painter and poet from the San Francisco Bay area. His name is associated with street artists, underground writers, and "outlaw" poets. He was one of San Francisco's original beat poets and an innovative artist who was active in the San Francisco Renaissance in the 1950s and 60s. He was a street poet in Greenwich Village in the 50s, writing about hookers, addicts, blue collar workers, and the dispossessed. Jack Kerouac wrote the introduction to his first book, published in 1957. He went on to publish over 20 books, chapbooks, and mimeo books. He also did some painting, mostly gouache in a primitive style. A terrific image of one of the lesser known but authentic beats (a term he hated).