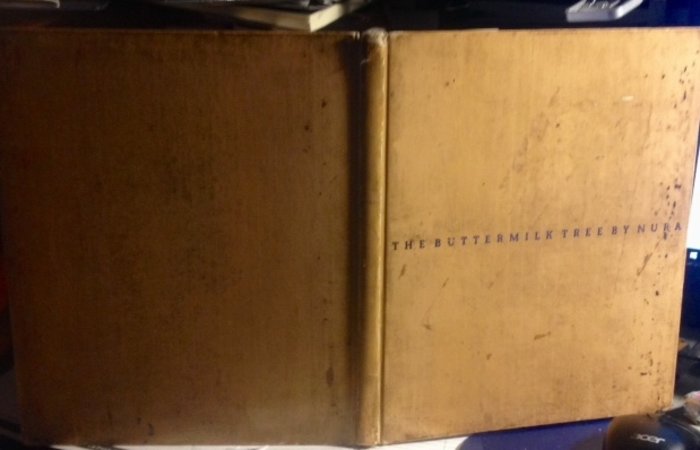 New York: Author, 1934. Quarto, variant binding of glossy peach boards . Unpaged. 16 b&w photogravures by the author / artist. Text printed on pale mauve thick stock, pale blue endpapers. Edition of 650 numbered copies, this copy not numbered, designated "Reviewer's copy". Two ink sketches by the author on the colophon page. Inscribed by the author at front "For - Clifton Fadiman, with all good wishes, Nura". Bit worn at spine ends and outer corners; covers soiled, with numerous small black spots; yellowing to margins of endpapers. Externally just good, internally fine. Second book of this American sculptor and painter. "Assiduous U. S. gallery snoopers and the Paris Salon d'Autonne have known about Nura since 1925. She studied in Kansas City's Art Institute, at the Art Students League in New York and in Chicago where she met her Painter-Husband Eduard Buk Ulreich. Buk Ulreich nicknamed her Nura because he 'never calls people by their right names.' Her right name is Norah Woodson Ulreich. When she and her husband do murals together they sign them Bukannura. Living in a Manhattan studio, they have no children because Nura feels a real one might engross her to the point that she could not paint imaginary ones." - from contemporary review in Time magazine. Clifton Paul "Kip" Fadiman (1904 -1999) was a popular American intellectual, author, editor, radio and television personality.; Signed by Author