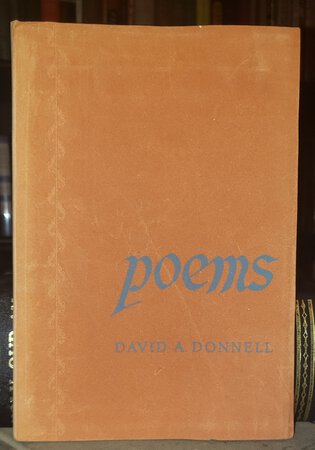 Thornhill, ON: The Village Press, 1961. Octavo, pp (28), rust-coloured flocked card covers decorated in blind and lettered in dark blue. Double spread illustrated title-page, printed in blue, gold and black. 18 poems. Some fading of the spine and inner margins of covers, light bookend (?) impression to rear cover, covers are a little rippled, as usual, owing to tension between the covers and the endpapers, else fine. "This book of poems, the first from the pen of David Donnell, was designed, illustrated and printed by Gus Rueter at The Village Press, Thornhill, Ontario, in October, 1961. The types used are Herman Zapf's Palatino and Goudy's Deepdene. One hundred and twenty-eight impressions were taken and then the type as gently distributed." - colophon. According to the late William Hoffer, from whose closing stock this copy came, Donnell attempted to destroy all copies. The present copy was obtained from the printer. Donnell won a Governor-General's Award for poetry in 1983 (Settlements) and a City of Toronto Book Award in 1993. He and John Robert Colombo printed Margaret Atwood's first book (Double Persephone, 1961). Gus Reuter was the father of another distinguished Canadian fine press printer, Will Reuter (Aliquando Press). Quite scarce.