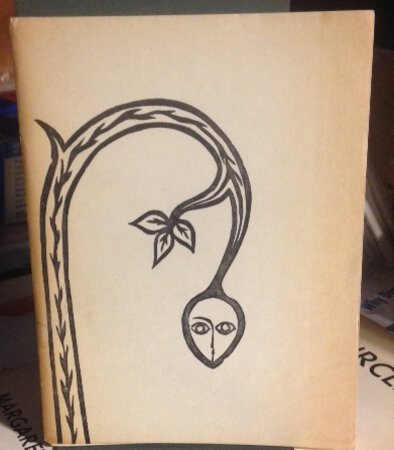 Toronto: Hawkshead Press, 1961. 17.2 cm, [16] pp, stapled and glued into white illustrated (by Atwood) card covers. Spine fold and inner margins of covers a bit yellowed, light yellowing to covers, nickel-size tan spot on rear cover, very small corner crease to rear cover, ink owner name "J. Carscallen" at top of title page, else fine. Like some copies which exist today, the text block has come loose from the covers because of the unsatisfactory glue (rubber cement). Atwood assembled the book herself and after some 80-90 copies were glued into the covers, she realized the glue wasn't working so she stapled the rest of the copies into the covers, as well as some with the glue. The copies where the stapled text block was only glued into the covers constitute the first state of the first edition, as here. THE AUTHOR'S FIRST BOOK, a collection of seven poems. According to Atwood, the edition size was 230 copies (or 250 copies as she has also stated). It was issued by John Robert Colombo's Hawkshead Press as Book One, Market Book Series (assisted by fellow poet David Donnell). This was Victoria University Professor James Andrew Carscallen's copy. Carscallen (1934-2016), who studied under Northrop Frye for his PhD and became a Victoria University professor in 1965, helped Atwood with some of her early manuscripts. She regarded him as a friend and inscribed books to him. On the short list of 20th century Canadian literature highspots, the scarce first book of Canada's best known literary author, a copy with a good pedigree and first state (80-90 copies).