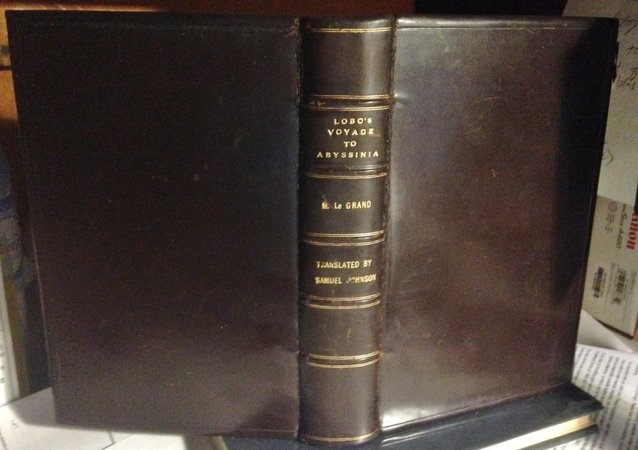 A VOYAGE TO ABYSSINIA...Containing the history, natural, civil, and ecclesiastical, of that remote and unrequited country, continued down to the beginning of the eighteenth century...

London / Edinburgh: Elliot and Ray / C. Elliot, 1789. Second and best edition, enlarged and corrected, of the first edition in English. Title page continues: " With fifteen dissertations on various subjects, relating to the antiquities, government, religion, manners, and natural history of Abyssinia. By M. [Joachim] Le Grand. Translated from the French by Samuel Johnson, LL.D. To which are added, various other tracts by the same author not published by Sir John Hawkins or Mr Stockdale". Octavo. pp [2, original blank], (4), 500, (2, ads), [2, original blank]. Bound in modern polished brown calf, spine with raised bands, gilt lettering, new cream endpapers. Ink owner names on verso of title; yellowing and moderate soiling throughout; light damp stain to lower inner corners and narrow light damp stain to fore margins of pp 409 to end; partial flaking to a few letters on spine; in all, VG+ externally, generally VG internally, tight in the binding, neither hinges nor joints cracked, both blanks and ads present >>> First published in 1735, this was Dr. Johnson's first work. Jerónimo Lobo, a Portuguese Jesuit, traveled to Lake Tana and the Blue Nile, reaching the province of Damot. He was the second European to describe the sources of the Blue Nile and was the leading European expert on Abyssinia / Ethiopia of his day. Like the other Jesuits, he was expelled from the country in 1648. This second edition includes a new preface by the editor, George Gleig, in which he attacks the numerous printer's errors in the 1735 edition. It also includes material not in that edition. The fourth Dissertation is about the mythical Christian ruler Prester John. There are seven "other tracts" by Johnson in the book. Courtney & Smith pp 2-4. (Old former owners' names are James Geddes, Thornhill, 1828, George Sutton, and Thomas Haggart. I believe these men were residents of Ontario.)