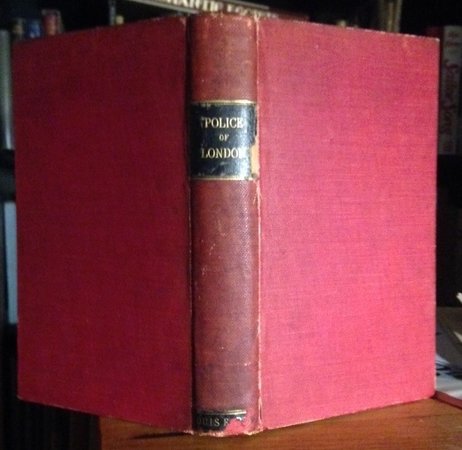 A TREATISE ON THE POLICE OF LONDON; Containing a Detail of the Various Crimes and Misdemeanors by which Public and Private Property and Security are, at Present, Injured and Endangered: and Suggesting Remedies for their Prevention....

Philadelphia: Printed for Benjamin Davies, no. 68, High-Street. By Henry Sweitzer, no. 85, Race-Street, 1798. Title page continues: "The First American Edition. By a Magistrate acting for the counties of Middlesex, Surry, Kent, and Essex.- For the City and Liberty of Westminster - and for the Liberty of the Tower of London." Narrow octavo, bound in in later crimson buckram with gilt-lettered spine labels; xiv, [6], 342, xxiv pp.; with the half-title leaf and a folding table. Bit of rubbing and mild fraying to the joints; chipping to the spine labels with loss of letters to the one at the foot (a former owner's name?); inner hinges cracked but secure; contents uniformly tanned with a few occasional small spots and stains; contemporary ink owner name at top of title page; in all, VG externally, internally mainly fine. Loosely laid in is a leaf from The Examiner, Jan. 12, 1812, discussing "Police Magistrates and Officers". The first American edition of this pioneering study of crime and punishment, poverty, penology, etc. First published London, 1796, this was the only American edition of the time. Colquhoun was a prolific writer on crime and the administration of justice and was surprisingly progressive in his views on such things as the utility of capital punishment and the meting out of draconian sentences for minor crimes. At the same time, however, the work includes long and virulently anti-Semitic passages on the Jews of London, a "superstitious" and "depraved race" who have established a "fraudulent" and "mischievous intercourse all over the country" in the sale of stolen goods. Nevertheless, Colquhoun's Treatise is at the very least invaluable as a work of sociology, providing a vast, lively and assiduously (if not always wholly accurately) documented examination of London's late-Georgian underworld, its thieves, counterfeiters, prostitutes, pickpockets, highwaymen, river pilferers, swindlers and low Gamblers, Black Legs, Glutmen, fraudulent and dissolute Publicans, Rakes and Giddy Young Men, and a host of others, constituting a "shocking catalogue of human depravity." ESTC W28374; Evans 33538; Beal 1010; Harvard Law Catalog 428.