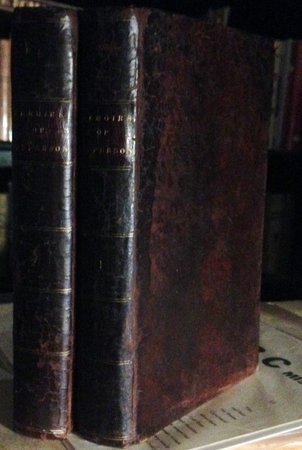 Memoirs of the Hon. Thomas Jefferson, Secretary of State, Vice-President, and President of the United States of America; containing a concise history of those states, from the acknowledgment of their independence...

(New York): Printed for the Purchasers, 1809. Title page continues: " With a view of the rise and progress of French influence and French principles in that country. In two volumes." Two volumes, octavo, 21.5 cm. Bound in contemporary calf, maroon titling pieces on spines. pp [2], iv, 404, [2]; [2], (4), 434, [4]. Spines a bit darkened; some rubbing to the sides; endpapers foxed; yellowing and occasional mild foxing in text; damp stain to lower inner margins of Vol. I from endpapers through p. iv; one-third of rear free endpaper of Vol. I torn away; inner hinges cracked; VG pair otherwise, text unworn, joints not cracked, tight in the bindings. "Federalist attack, not authentic memoirs"- No. 241, p. 32, in: Shuffleton, Frank. Thomas Jefferson : a comprehensive, annotated bibliography (1983). Shaw & Shoemaker, 17154. Sabin 11004. "Venomously critical; said to have been suppressed for fear of libel suits. " - Howes C164. Laid in is an old bookseller's catalogue description which states "A considerable edition was published, but the printers became alarmed in view of the stringency of the law of libel at the time, and took advice of a leading attorney, Mr. Samuel M. Hopkins, a young lawyer, in Auburn, N.Y. Mr. Hopkins informed them that ' he found, on an average, a libel on every page.' On this the memoir was suppressed and the edition destroyed, after a few copies only had been sold." Another old catalogue description states it was copyrighted by "Thomas Hall" and "in fact was never published." The work was written and published by author, editor, drama critic, and journalist Stephen Cullen Carpenter, an ardent federalist, who accused Jefferson of being too much under the influence of the French revolutionaries. Carpenter was a pro-English Irishman who fled from trouble with the British army in 1802 or 1803, settling in Charleston, SC, and in 1806 moving his periodical the Monthly Register, Magazine, and Review of the United States to New York. While it seems likely that the book was suppressed, it can't be true that only a few copies were sold before the edition was destroyed as it is not as rare all that today. Still, a better than average copy of a fairly scarce book, a publication worthy of Breibart News.