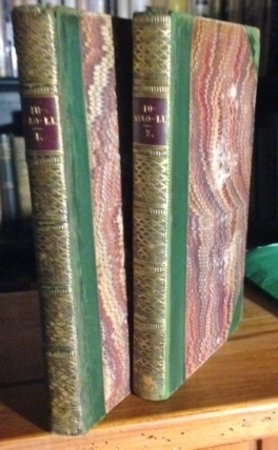 IU-KIAO-LI; or, The Two Fair Cousins. A Chinese novel. From the French of M. Abel-Remusat

London: Hunt & Clarke, 1827. Two volumes, 17.5 cm. Bound in half calf and marbled boards, sprinkled page edges, spine with maroon labels, gilt decoration. Armorial bookplates of Fitzherbert-Macdonald. Rubbing and scuffing to joints and corners neatly touched up; 1859 ink owner names; moderate foxing early and late; rubbing to the boards; else a VG pair, hinges not cracked, tight in the binding, text fine but for the foxing. >>>First published in French under the title Iu-kiao-li, ou, Les deux cousines: roman Chinois, 1826, making this one of the earliest examples of Chinese literature translated for Western readers. The original text, today more correctly transliterated as Yu Jiao Li, dates from the early 17th century and is typical of romances of the late Ming and early Qing period. The original translator, Jean-Pierre Abel-Rémusat, 1788-1832, trained for a career in medicine but instead pursued Chinese studies while researching traditional Chinese medicine. He taught himself to read Mandarin and became the first Chair of Sinology at the Collège de France in Paris, where did much to popularize Chinese culture. This edition includes (mostly) his original Preface which is a brief account of the merits and peculiarities of Chinese fiction. Not in Sadleir; Wolff 7497 (noting that some people thought this publication was a hoax). The name of the English translator is not known. Fitzherbert Macdonald was a solicitor who was the Registrar of Salisbury from at least 1851 to 1859.