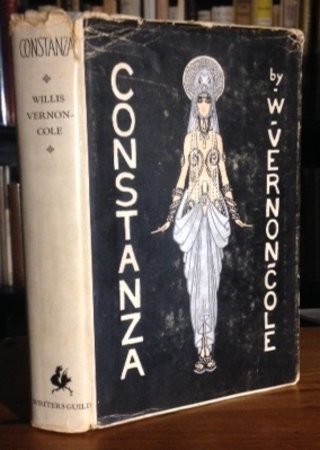 New York: The Writers Guild, 1927. Grey cloth. pp 222, [2]. Rear cover a little bowed, with a one inch abrasion to the fore edge; page edges yellowed; else fine. Dust jacket has nicks, creases, and a short tear (internally repaired) at head of spine; white spine lightly darkened; small chips to outer corners; rubbing to flap folds with 1.5 inches of rear fold worn away; black front panel has creases to upper inner corner and mild rubbing; VG otherwise and still attractive. With very nice Art Deco illustrated endpapers and front panel of the jacket by Léon Laugier (1879-1962). An historical novel set in Sicily at the end of the 13th century, involving "Soldiers, Sicilian mafiosi, townspeople, shepherds, fishermen, dancers, men at arms, nuns, courtiers, monks, gods, nymphs, tritons, etc.", as well as Roggero Mastrangelo, "last of the Normans" and Charles of Anjou. Willis Vernon Cole was a well-to-do American poet and novelist who lived in Greenwich Village and France. Claiming his failing eyesight was cured by Christian Science, he became an ardent adherent and set up an offfice for healing, where he charged small fees. This landed him in court, charged with practicing medicine without a license. He endured five years of trials and eventually won his case, setting the precedent that allows religious healing to be legal in the United States. This novel concerns the War of the Sicilian Vespers, a rebellion which overturned French rule. Some criminous interest (Mafia). Not in Hubin but probably should be. Not much is known about the artist Laugier, but his work is very appealing.