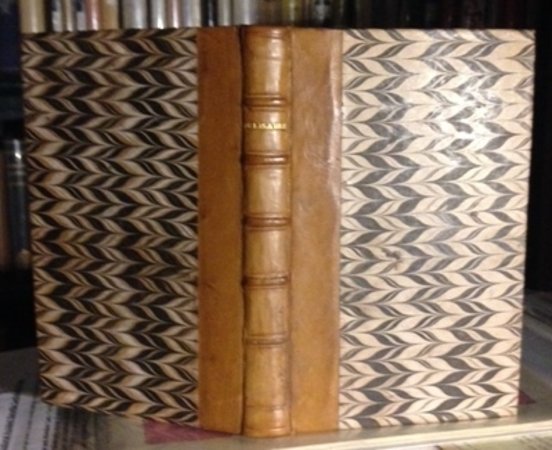 Amsterdam: Aux Depens de la Compagnie, 1767. Early printing, same year as the first. Small octavo (17 cm), untrimmed, in later quarter tan calf and marbled boards spine with raised bands, gilt title. pp viii, (190), [2, blank]. Tanning to the page edges, creases to one leaf near middle; else fine externally and internally. Contains an author preface. Pages 1-149 contain the novel BÉLISIARE, which is based on the life of the Byzantine general Flavius Belisarius; pages 151-89 contain his "Fragmens de philosophie morale"'; the last page contains"Vers sur la condemnation de Bélisaire projettée en Sorbonne". The famous plea for religious tolerance in Chapter XV brought on the condemnation of the Sorbonne and the Archbishop of Paris, all but ensuring the book's success. "Bélisaire is a banned 1767 French novel on the life of the Byzantine general Belisarius by Jean-François Marmontel. It popularised the apochryphal tale of his being reduced to beggary by Justinian I despite his great services to the empire, citing it as an example of the ingratitude of those in power towards their faithful servants and indicting the French king Louis XV by proxy as another such ungrateful monarch." - Wikipedia. Marmontel's contributions to the great Encyclopédie, collected as Eléments de Littérature, is still considered a classic of French literature. "John Ruskin named him as one of the three people in history who were the most influential for him. In his autobiography, John Stuart Mill credits Memoires d'un père with curing him of depression." - Wikipedia. A nice copy of this French classic.