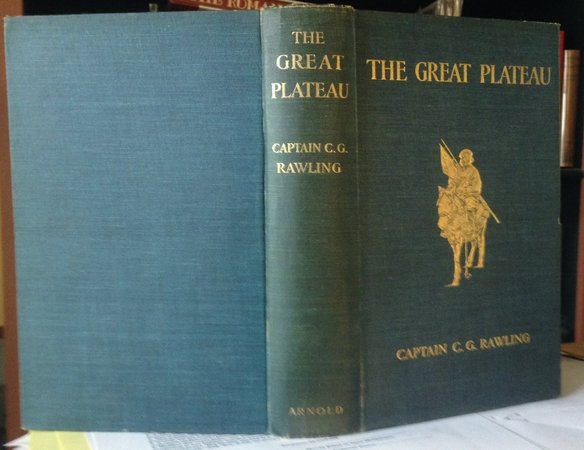 THE GREAT PLATEAU: being an account of exploration in central Tibet, 1903, and of the Gartok Expedition, 1904-1905

London: Edward Arnold. Blue pictorial cloth stamped in gilt. pp xii, 324, 16 (Dec. 1905 catalogue) + frontispiece with tissue guard and 31 other plates containing 56 photos. Spine very lightly darkened; ink private owner name and armorial bookplate at front; page edges yellowed, else a fine, bright & tight copy. >>> Brigadier-General Cecil Godfrey Rawling, CMG, CIE, DSO, FRGS...was a British soldier, explorer and author whose expeditions to Tibet and Dutch New Guinea brought acclaim from the Royal Geographic Society and awards from the Dutch and Indian governments. He published two books detailing his experiences and served in the British Army on the North-West Frontier of India and in France during the First World War. It was during this latter service that he was killed in action aged 47 during the Battle of Passchendaele....In 1903 he reentered Tibet to begin a professional survey although without official sanction, and in the following year Captain Rawling was attached to the British expedition to Tibet, charged with exploring and surveying the mountainous terrain. During the diplomatic expedition and the campaign which followed it, Rawling surveyed over 40,000 square miles (100,000 km2) of Tibet in addition to his military duties. His team even explored the foothills of Everest and included parts of the mountain in his survey, establishing it as the highest mountain in the Himalayas. It is said that had his seniors on the expedition not forbidden it, he would have become the first white man to attempt to climb the mountain from the north face. He was also the first person to successfully identify the source of the river Brahmaputra after a lengthy and hazardous journey across the war zone. Upon his return to England, Rawling received numerous accolades, including a CIE from the Indian government and in 1909 was awarded the Murchison Bequest of the Royal Geographic Society in London, of which he was a fellow." - Wikipedia. A nice copy of an important book. 1.5 kg; Octavo