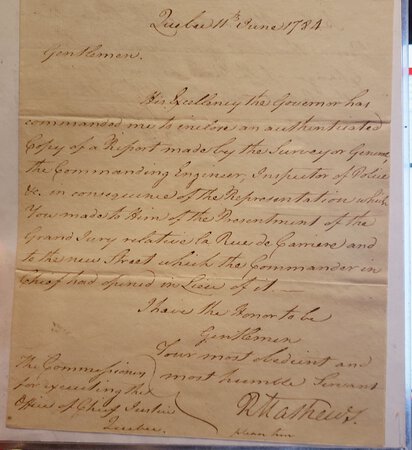 1784. One sheet folded to make four 22.8 x 18.8 cm pages, letter on recto of first page with postscript on verso, other pages blank. Written in ink on laid paper watermarked "I. Taylor". Two horizontal folds. Fine, clear, clean. "Gentlemen, / His Excellency the Governor has commanded me to enclose an authenticated Copy / of a report made by the Surveyor General, the Commanding Engineer, Inspector of / Police, &c., in consequence of the Representation which You made to Him of the / Presentment of the Grand Jury relative la Rue du Carrier and to the new Street / which the Commander in Chief had assessed in Lieu of it. / I have the Honor to be / Gentlemen / Your most obedient and most humble servant / The Commissioners for executing the Office of the Chief Justice Quebec / R. Watters / please turn / N.B. - Madamoiselle la Fleur, the person most incommoded by the Change of the / Road, as mentioned in the Report has had forty dollars as an Idemnification. R.M." >>> Captain R. Mathews was Secretary to Sir Frederick Haldimand, Governor of Quebec 1778-86. Rue des Carriièrs is still a street in the old city of Québec. ; Manuscript