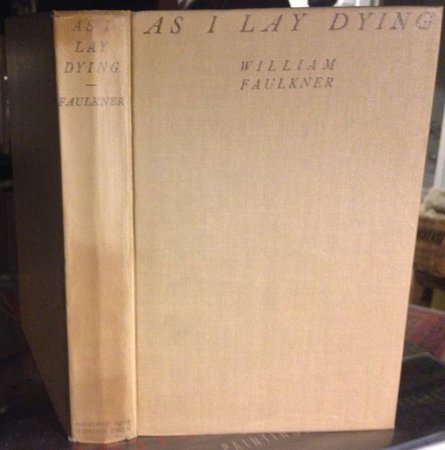 AS I LAY DYING

New York: Jonathan Cape : Harrison Smith, 1930. Second issue (not second printing), with pp 11-12 a cancel leaf, correcting the alignment of the initial letter "I". Yellow cloth lettered in brown, brown top page edges, light tan endpapers, fore and bottom page edges tinted tan, as issued (not age yellowing). Variant binding with the cover lettering undamaged. Spine has a vertical ridge down the centre and light, uneven browing; else fine, tight and unworn, no owner names. In a new facsimile dust jacket. Total first printing of only 2522 copies, of which 750 were of the first issue and 1772 of the second. Peterson / Serendipity A7.2. >>> Faulkner's fifth novel, one of the highspots of 20th century American literature, a pioneer work utilizing the stream of consciousness technique. In 1998, the Modern Library ranked As I Lay Dying 35th on its list of the 100 best English-language novels of the 20th century.