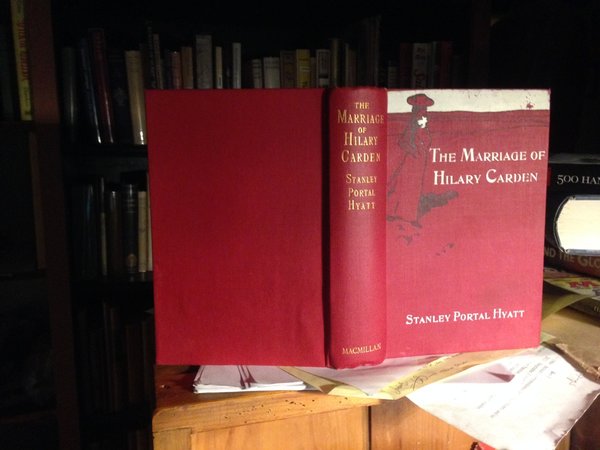 THE MARRIAGE OF HILARY CARDEN

Toronto: Macmillan, no date (1909). Made from sheets of the London: T.Werner Laurie, 1909, first edition. Red pictorial cloth stamped in black and white, spine gilt lettered. pp (viii), 300 (12, Laurie ads). Mild flaking to the white band of sky in top margin of front cover; else a fine, bright copy. Hyatt, an Englishman from a well-to-do background, threw it all off for a life of adventure and exploration, which he certainly had, traveling to Australia, up the China coast to Vladivostok, fighting for the Americans in the Philippines, Mozambique, and most notably Rhodesia, where he was a considerable presence and where this novel is set.. In his autobiograpy, 'The Diary of a Soldier of Fortune', Hyatt described his experiences as "Engineer, Sheep Station Hand, Nigger Driver, Hunter, Trader, Transport Rider, Labour Agent, Cold Storage Engineer, Explorer, Lecturer, Pressman, American Soldier, Blockade Runner and Tramp". Having had successes and many failures in his business ventures in Africa, he returned to England where he had a successful career as a novelist and writer. He became quite ill from his travels, contracting malaria, becoming a morphine addict and dying of tuberculosis at age 37. The present novel is scarce in any edition and rare in this Canadian issue. AMICUS locates only one copy in Canadian libraries.; Octavo