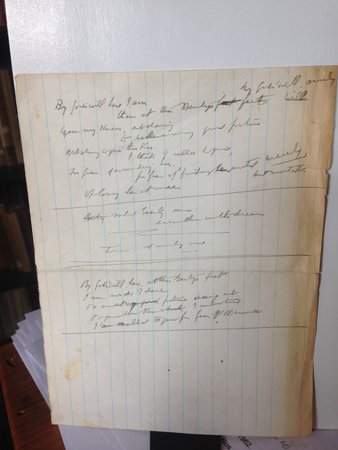 Holograph drafts of a poem

1894. 6 x 8 inch sheet of lined paper. Horizontal crease to middle, yellowing and nicks to fore edge, VG otherwise. First draft with numerous changes of a poem beginning (in the first version) "By God's will here I am". The first version has nine lines, with changes. There is a middle section of three lines, followed by a second version of four lines beginning "By God's will here" (one word crossed out). The hand is difficult and I have not been able to decipher it all., nor have I determined whether or not it has been published in any form. I have recently compared this unsigned and untitled ms. with a known extensive sample of his hand and am morally certain this is indeed by Ross (having long suspected such). "William Wrightson Eustace Ross (June 14, 1894 - August 26, 1966) was a Canadian geophysicist and poet. He was the first published poet in Canada to write Imagist poetry, and later the first to write surrealist verse, both of which have led some to call him 'the first modern Canadian poet.' " - Wikipedia. Ross began writing poetry around 1923. The next year he married and bought a house on Delaware Ave. in Toronto, where he lived for the remainder of his life. He developed a distinctly Canadian verse form he called "laconic". He was published in the noted American little mags "Poetry" and "The Dial". He privately published his first book "Laconics" in 1930, which garnered a favourable review by Marianne Moore. "Sonnets", also privately published, followed in 1932. Some prose poems influenced by Max Jacob and Franz Kafka were published New Directions in Prose & Poetry for 1937, which are considered to be the first published prose poems written in Canada. His 1956 Contact Press book "Experiment 1923-29" was the last book published in his lifetime. "Shapes and Sounds" (1968), a posthumous and substantial collection contained some new poetry. Ross holograph, including even a signature, is rare in the market.; Manuscript