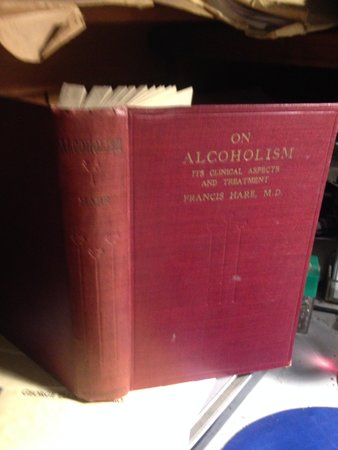 ON ALCOHOLISM: its clinical aspects and treatment

London: J.& A. Churchill, 1912. Red cloth lettered in gilt, decorated in blind. pp (xii), 269. Index. Shallow bruise to upper inner edge of front cover, page edges slightly yellowed; rubber stamped ink name of J.A. MacPhee, M.D.; spine very lightly sunned; else a VG clean, tight and unworn copy. Dr. Hare was Medical Superintendent of the Norwood Sanatorium in Beckenham. "The Norwood Sanatorium had been founded in Upper Norwood in 1900 for the medical treatment of alcoholism and other forms of drug addiction...The Sanatorium was managed by a committee of well-known medical men, who derived no pecuniary benefit from the work carried on there; any profits made were devoted to the further study of inebriety and its treatment....A course of treatment at the Sanatorium lasted six weeks. On admission, the patient was physically examined and a history was taken. Unless there was a contraindication, a brisk initial purge was given. The next day the patient was given a tonic to drink, consisting of red cinchona bark, gentian and capsicum, together with minute doses of strychnine and atropine (by the end of the third week the capsicum and strychnine were omitted). This tonic was administered six times daily at regular intervals. Afterwards, hypodermic injections of strychnine nitrate and atropine sulphate were added to the regime, three times a day at regular intervals. The doses of strychnine and atropine were gradually increased, then gradually reduced. By the middle of the third week, the atropine had fallen in nil, while the strychnine was continued in slowly diminishing doses until the end of the sixth week." - Lost Hospitals of London website.