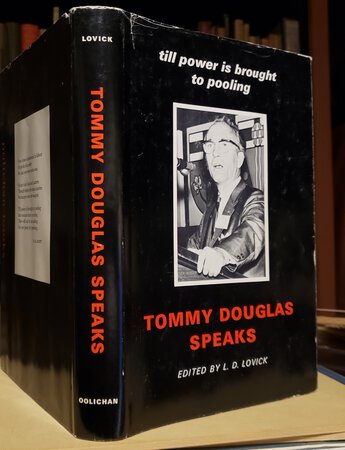 TOMMY DOUGLAS SPEAKS: till power is brought to pooling. Edited by L.D. Lovick

Lantzville, BC: Oolichan Books, 1979. Black boards. pp 288. Fine copy. Black dust jacket has a few nicks, one short tear, mild rubbing; VG. GRAHAM SPRY'S COPY, inscribed by him in ink on the front free endpaper "From the author - i.e. T.C.D. April 4, 1979". With Spry's ink signature just above. And with his two small pencil notes (pp 19 & 35) and pencil margin ticks, in text. Laid in is printed letter signed "T.C. Douglas" (printed signature). On his House of Commons stationery, April 4, 1979, two paragraphs, salutation "Dear Friend". Douglas is sending copies of this book, an edited collection of speeches from his 44 years in public office, to all members of the Douglas-Coldwell Foundation. >>> Graham Spry, CC (February 20, 1900 - November 24, 1983) was a Canadian broadcasting pioneer, business executive, diplomat and socialist. As a broadcaster, he was instrumental in the formation of the CBC. "A socialist, Spry cofounded the League for Social Reconstruction (LSR), contributed to the writing of the Regina Manifesto, and purchased both the Farmer's Sun (publication of the United Farmers of Ontario), renamed the New Commonwealth, and the Canadian Forum to propagate the LSR's views. He served as vice president of the Ontario Co-operative Commonwealth Federation (CCF) from 1934 to 1936. He was the first national Co-operative Commonwealth Federation candidate in Ontario, running in the 24 September 1934 by-election in Toronto East. He ran again for the National CCF in the 1935 general election, this time in the newly created Broadview electoral district. He lost on both occasions to Conservative Tommy Church. During the Spanish Civil War Spry helped organize the Mackenzie-Papineau Battalion that fought on the Republican side. In 1938, Spry married Irene Mary Biss. Unable to find work in Canada because of his socialist convictions, however, Spry accepted a job offer from an old Oxford friend and served as a British-based executive for Standard Oil from 1940 to 1946, managing subsidiaries operating in the Middle East and elsewhere. From 1942 to 1945, he also served as personal assistant to Sir Stafford Cripps, a Labour minister in the wartime British cabinet, and travelled with Cripps to India. After the war, Spry was named agent-general of Tommy Douglas's CCF government in London representing the province of Saskatchewan from 1946 to 1968 in Britain, including responsibility for Europe and the Middle East. Spry played a crucial role during the 1962 Saskatchewan doctors' strike against Medicare by recruiting British doctors to move to the province. In 1968 he reactivated his involvement with broadcasting, founding the Canadian Broadcasting League over which he presided until 1973. In 1970, Spry reputedly turned down Prime Minister Pierre Trudeau's offer of a Senate seat. That same year, he was made a Companion of the Order of Canada. Graham Spry died in Ottawa on November 24, 1983. A federal government building dedicated in the name of Graham Spry is located at 250 Lanark Avenger, Ottawa. It houses several directorates of Health Canada." - Wikipedia. >>> Thomas Clement "Tommy" Douglas PC CC SOM (20 October 1904 - 24 February 1986) was a Canadian social-democratic politician and Baptist minister. He was elected to the Canadian House of Commons in 1935 as a member of the Co-operative Commonwealth Federation (CCF). He left federal politics to become the Saskatchewan CCF's leader and then the seventh Premier of Saskatchewan from 1944 to 1961. His government was the first social-democratic government in North America, and it introduced the continent's first single-payer, universal health care program. After setting up Saskatchewan's medicare program, Douglas stepped down as premier and ran to lead the newly formed federal New Democratic Party (NDP), the successor party of the National CCF. He was elected as its first federal leader in 1961. Although Douglas never led the party to government, through much of his tenure the party held the balance of power in the House of Commons. He was noted as being the main opposition to the imposition of the War Measures Act during the 1970 October Crisis. He resigned as leader the next year, but remained as a Member of Parliament until 1979. Douglas was awarded many honorary degrees, and a foundation was named for him and his political mentor Major James Coldwell in 1971. In 1981, he was invested into the Order of Canada, and he became a member of Canada's Privy Council in 1984, two years before his death. In 2004, a CBC Television program named Tommy Douglas "The Greatest Canadian", based on a Canada-wide, viewer-supported survey." - Wikipedia. >>> A terrific association copy between two saints of the Canadian left, from the days when giants still walked the earth.; Octavo