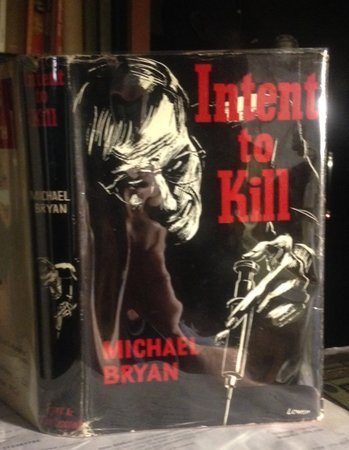 London: Eyre & Spottiswoode, 1956. Variant in red boards, spine stamped in black (also noted in blue boards). pp 190. Page edges tanned, text paper toned, just a mite leaned, covers a little bowed, else fine. Black dust jacket (art by Lowen, a sinister face holding a hypodermic needle) has minor rubbing and creased nicks to spine ends; quite minor wear to outer corners; near fine otherwise, flap price intact, no sunning to the red spine lettering. A crime novel set in Montreal. "The glaring lights above the operation table had been burning for most of the day. A man's brain lay exposed, and silent, whiite figures examined it and worked it over it with urgent skill and care. The surgeon poised, then lowered the scalpel to the damaged area. A barely heard moan, and the patient was unconscious. The patient in his own country was an important political figure, and his opponents knew that the only chance of success for their revolt lay in taking advantage of his absence. Which was why, in a hotel somewhere in Montreal, three men were plotting what to do, in case the operation succeeded." - jacket flap. The patient is the President of an unnamed South American country. This was Moore's seventh novel overall, the sixth of his seven potboiler crime novels, and the first of the two under the "Michael Bryan" pseudonym. Published in the USA as a Dell paperback original in 1956, which is fairly common; this, the first hardcover edition, is, along with his other E&S hardcover MURDER IN MAJORCA (1958), his scarcest book. It was also the first of a number of his novels to be the basis of a film (Intent to Kill, 1958), starring Richard Todd, Betsy Drake, Herbert Lom, Warren Stevens, Alexander Knox, and Jackie Collins, and filmed in Montreal. Rees A7b. ; Small octavo