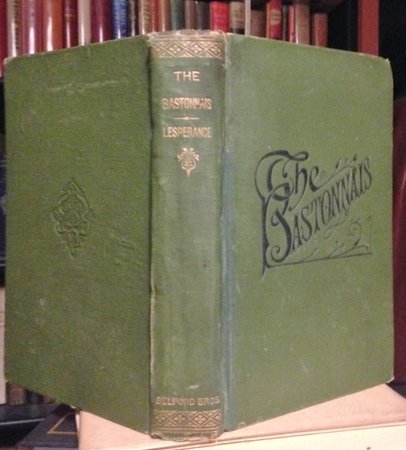 THE BASTONNAIS: a tale of the American invasion of Canada in 1775-76

Toronto: Belford Brothers, 1877. Original olive green decorated cloth stamped in black, gilt, and blind, dark broiwn endpapers. pp 328. Book a little leaned, mild wear to spine ends, cracked front inner hinge neatly repaired with brown coloured rice paper; page edges yellowed; soft vertical ridges to spine; else a VG clean and unworn copy. "A lively and well-organized historical romance....It give a sympathetic picture of French Canadians during the American siege of Quebec." - Story p. 453. The Americans were defeated and repelled and they also failed to convince the French Canadians to come in on the side of the colonies against Britain. Quebecers had been treated not too badly by their British conquerors and were allowed to keep their religion and language. They would have lost their language and their culture had they joined the American rebels. Very wisely, they didn't.; Octavo