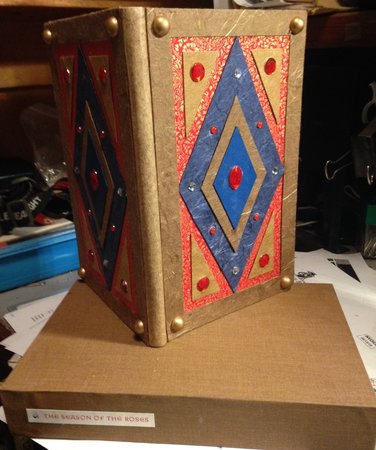 THE SEASON OF THE ROSES: eighteen minnesongs selected and translated by Willem Campschreur

No place (Dundas, Ontario): The Aliquando Press, 2017. Total edition of 50 copies, this is #47, one of only five in this mock medieval binding. The German text is printed in red, with the English translation and introduction printed in black and the line drawings in purple. The title page is printed in red, purple, and black. Fine copy in the original brown cloth clamshell box with paper spine label. " The introduction and translation of The Seasons of the Roses were set digititally in Quadraat and printed by offset at Gaspereau Press. The Middle High German text was handset in Jessen-Schrift, with Dartmouth initials, and printed letterpress at The Aliquando Press by William Reuter, who also designed and bound the book. The drawings by the printer were inspired by figures in the Manesse Codex and other medieval manuscripts. The paper is Mohawk Superfine. Of fifty copies produced in August 2017, copies 1 to 45 were bound with chiyogami paper covered boards. Copies 36 to 45 are reserved for the translator. Copies 46 to 50 contain hand-coloured illustrations and were specially bound in a faux-jewelled 'medieval' binding, with protective clamshell box." This copy, one of the five in the "medieval" binding, is bound with brown textured paper covered boards with a central rectangular inset containing blue diamond shaped pieces, with light brown card triangles in the corners, on a gilt on red floral background. Light brown patterned endpapers. Attached at the rear inside the box is a suite of hand coloured illustrations (10 panels) printed accordian style, with a covering of the same gilt on red floral paper used as the inset background. There are four "brass" (plastic) bosses on the outer corners, four red plastic "jewels" on each corner triangle in the inset, a central oval red plastic "jewel", and on the largest blue diamond four small red and four clear "jewels". Front and rear covers are identical. The priceless plastic jewels are from the Atelier Dollarama. Veldke, a poet / troubador, is thought to have been born in the Netherlands around 1140, near Maastricht. Minnesongs are courtly love lyrics. He wrote in the Maasland dialect and is considered to be the first known author who wrote in the Dutch vernacular. Reuter told me that this binding was intended as a bit of whimsy. It is a delight to these eyes. ; Octavo