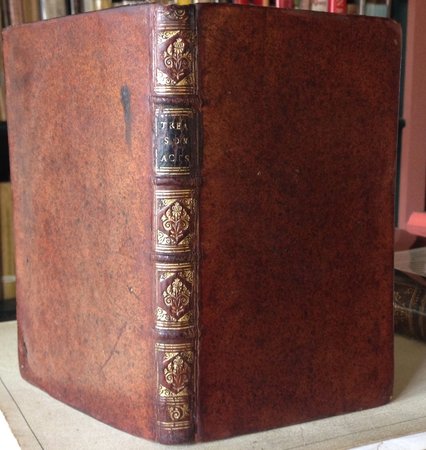 A collection of the several statutes, and parts of statutes, now in force, relating to high treason, and misprision of high treason.

London: Printed by the assigns of Thomas Newcomb, and Henry Hills, decens’d; Printers to the Queens most Excellent Majesty, 1710. Second printing (first was in 1709). 113,[15],44,[4]p "A form and method of trial of commoners, in cases of high treason" has a separate titlepage; the register is continuous - With an initial imprimatur leaf. ESTC T136808 Old calf, spine with raised bands, titling piece, gilt decoration, edges decorated in gilt. Mild spine rubbing, inner hinges cracked but quite firm; else fine. Parliament ordered the statutes published in order to harmonize the laws of England and Scotland, following the union of 1707 and the Treason Act of 1708. ; 12mo