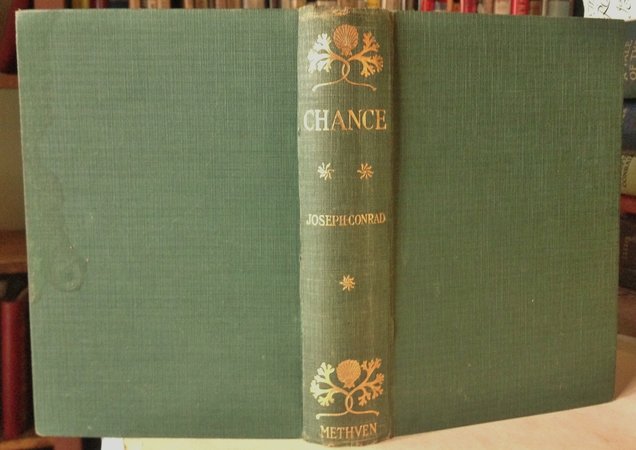 CHANCE: a tale in two parts

London: Methuen, 1914. Green cloth, spine lettered and decorated in gilt. pp (viii), (408), 8, Autumn, 1913, ads + 31 pp Sept, 1913, catalogue. Cancel title leaf. Variant spine imprint "Methven". First state list of titles opposite title page with "Narcissus". Motto on the title page is 29.5 mm below Conrad's name, Slight wear to spine ends, with nick at head; separation to gutter between pp vi and vii; yellowing to page edges; old bookseller's clipped description pasted at bottom of front pastedown; damp stains to outer margin of rear cover; else a VG clean and bright copy. CHANCE is Conrad's most bibliographically complex work - in fact it is a nightmare. Because of a binders' strike, intended Sept. 1913, publication was delayed until Jan., 1914. Sheets with a 1913 date had already been printed, but most were recalled and supplied with a cancel title leaf dated 1914, though 50 or so, with integral 1913 title leaves, escaped the knife and constitute the rare "first first". Copies destined for the colonial and Canadian markets were to be recalled for use in the domestic market, but that decision was reversed and then reversed again. See Cagle A17, p 179, where the redoubtable bibliographer was forced to admit that "The binders' strike with the resulting delays, shifting of stock from colonial and Canadian issues to the domestic market and back again and the various cancel titles have left a maze of printings, issues and states of CHANCE which has left more people than just the book's author confused about these early printings." To add to the fun, there were three printings by Nov., 1913, with title pages identifying them as "second edition" and third "edition", but some of these, with cancels, were added to the stew. Some cancel title leaves were dated 1913, but these are later. ; Octavo