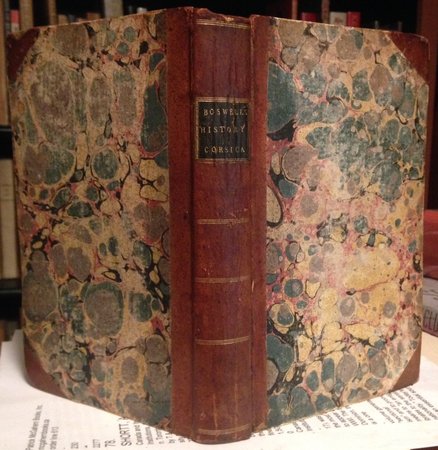 AN ACCOUNT OF CORSICA: the journal of a tour to that island and memoirs of Pascal Paoli.The second edition

Edward and Charles Dilly, 1768. Second edition, first London edition, same year as the Glasgow first, with some minor authorial changes, variant that has Appendix listed in Contents at p. 141 instead of correctly at p. 241. pp (xxiv), 384 + folding frontispiece map; half-title present. Bound in contemporary half calf and marbled boards, spine with label and gilt rules. Spine has very shallow chip across head, slight rubbing, rippling to the shiny surface; cracked front inner hinge neatly repaired; tanning to corners of endpapers from binding materials; armorial bookplate (browned) of Robert Sherson, M.D., with his ink signature; crease to one fold of frontispiece, which has lightly offset onto the title page; VG otherwise, text fine. The young Boswell's first important publication, "with its reports of the gallant islanders and a Plutarchan depiction of [General Pascal] Paoli paralleled with several classical heroes, it was an immediate success. The work was widely read and translated, stimulated great interest in Paoli and the Corsican cause, brought its author wide fame in Britain and Europe, and found an interested readership among the Americans. It attracted the notice of the French government (which had a translation made), and though Boswell's ambition for British intervention was not to be fulfilled, he probably influenced Britain's decision to send secret supplies of arms to the Corsicans" - ODNB. ESTC T26158 ; Pottle 24; Tinker 322. Edition of 3.5k copies, published a month after the first.