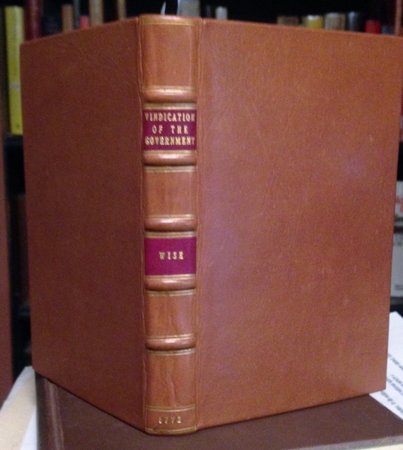 Boston: John Boyles, 1772. Three parts in one, each with separate dated title leaf. pp 80, 96, (69). Edition of 500 copies. Newly rebound in crushed brown morocco, spine with raised bands, red labels. Text paper yellowed; light foxing to title leaf; front endpapers, title leaf, and last two leaves browned in margins; extensive ink notes on front endpaper of one Edward Tuckerman, who has also signed his name in top margin of title page. with his occasional marginalia and short underlines in text; repair with paper to gutter of title leaf, making the book a bit tight in the binding. In all, fine externally, good-VG internally. "John Wise ...was a Congregationalist reverend and political leader in Massachusetts during the American colonial period. Wise was noted for his political activism, specifically his protests against British taxation, for which he was once jailed. As the pastor of the Chebacco Parish from 1680 to his death in 1725, Wise lived in Ipswich, Massachusetts, often called 'the birthplace of American independence.' ... Calvin Coolidge referred to him as one of the inspirations for the Declaration of Independence." - Wikipedia The 1717 first printing of A Vindication is Grolier American 100 #7. Sabin 104901; Howes W-595: "The most authoritative defense of Congregational polity, recognized as such even in law courts. There was a second edition, with continuous pagination, also in 1772.