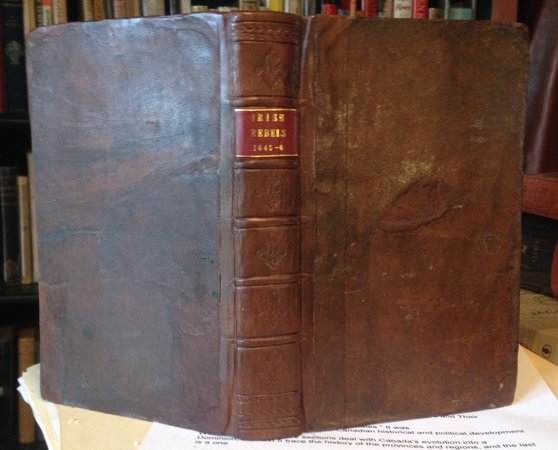 AN INQUIRY INTO THE SHARE, WHICH KING CHARLES I HAD IN THE TRANSACTIONS OF THE EARL OF GLAMORGAN, afterwards the Marquis of Worcester for bringing over a band of Irish rebels to assist the King in the years 1645 and 1646...

London: A. Millar, 1756. The title page continues: "In which Mr. Carte's imperfect account of that affair, and his use of the Ms. memoirs of the Pope's nuncio Rinuccini, are impartially considered. The whole drawn up from the best authorities printed and manuscript. The second edition, to which is added an appendix, containing several letters of the King to the Earl of Glanmorgan, from the originals in the Harleian Library of manuscripts." pp viii, 376. Bound in contemporary calf, spine with red label, raised bands, decoration in blind. Rebacked; front inner hinge neatly repaired with paper; some yellowing and minor soiling to endpapers, minor soiling to verso of title leaf; VG copy, text clean and unworn, tight in the binding. Published anonymously. Follows the text of the 1747 first edition but for the addition of the Appendix. ESTC N7691.; Octavo