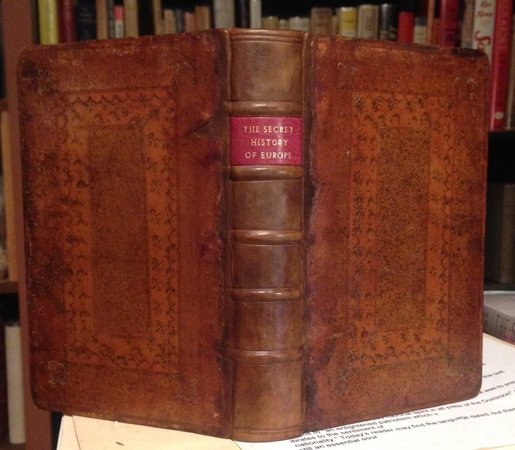 THE SECRET HISTORY OF EUROPE, PART I. [bound with] PART II

London: A. Baldwin, 1712. The title page continues: " Shewing that the late greatness of the French power was never so much owing to the number or goodness of their troops, and the Conduct of their Ministry at Home, as to the treachery and corruption of the ministers abroad. Giving a full Account Of the Insincerity of England, Sweden, and Holland, in the Triple League,. Of the Sieur De Wit’s Correspondence with France, and his Murder by the Rabble, Of the close Alliance between Charles II. and Lewis XIV, Of the Poisoning of Madam___, Of the Intrigues of Mr. Montague Ambassador in France, and the E. of D. T___r in England, and Of the Secret Treaty between King James, and the French King. The whole Collected from Authentick Memoirs, as well Manuscript as Printed. The second edition, with additions." pp (4), 251, (12, Index), [1]; (6), (2, ads), 292, (12, Index). Part II, which has a separate title leaf and is the first edition, treats of the Duke of Monmouth's reception at the Hague and by the Prince of Orange, remarks on Father Orleans history of the Revolution, of the French king's personal hatred of King William, and much more. Contemporary calf, sides decorated in blind, later rebacking with raised bands and red label. Cracked inner hinges neatly repaired with paper, browning to endpaper margins, ink name on title crossed out, armorial bookplate on verso of title of Jacob Harcourt; in all VG or better, text lightly yellowed but fine, tight in the binding. Two more parts were published, in 1713 and 1715. Published anonymously. Oldmixon was an English historian and pamphleteer. His histories of England are said to be very biased; Octavo