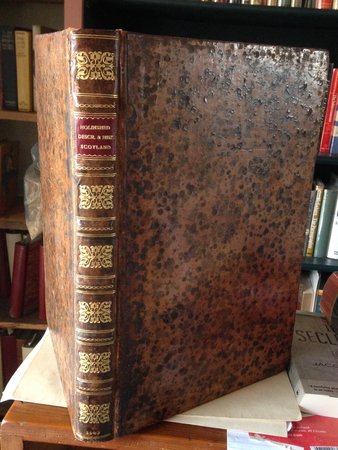 THE DESCRIPTION OF SCOTLAND, written at the first by Hector Boetius in Latine, and afterward translated into the Scotish speech by Iohn Bellenden, Archdeacon of Murrey, and now finallie into English by R.H...

London: Printed by Henry Denham, 1587. The title page continues: " Whereupon is inferred the historie of Scotland, conteining the beginning, increase, proceeding, continuance, acts, and governement of the Scottish nation, from the originall thereof unto the yeare 1571, gathered and written in English by Raphaell Hollindshead: and continued from 1571, to 1585, by others." Though the title page is dated 1585, the colophon reads "Finished in Ianuarie 1587, and the 29 of the Queenes Maiesties reigne, with the full continuation of the former yeares, at the expenses of Iohn Harison, George Bishop, Rafe Newberie, Henrie Denham, and Thomas VVoodcocke. At London printed [by Henry Denham] in Aldersgate street at the signe of the Starre". Illustrated title page, head and tail pieces, illustrated initial, text in black letter. Bound in old (early 19th century?) mottled calf, rebacked, spine with raised bands, red label, gilt ornament. Green endpapers. Rubbing to the front joint, modest wear to outer corners; in all VG or better externally, internally fine and fresh, tight in the binding. This is volume 2 only (of 3) of Holinshed's Chronicles of England, Ireland, and Scotland, previously published in 1577 in a two volume format. See ESTC S122178. This revised second edition is the one Shakespeare used for most of his history plays, the plot of Macbeth, and for portions of King Lear and Cymbeline. "The Scottish section is largely a translation of Hector Boece's Scotorum Historiae. A second edition was issued in 1587, but it contained some passages that were considered offensive to the Queen and her ministers. The pages in question were removed by order of the Privy Council. The missing passages were separately published in 1723, and a complete reprint appeared in 1807." - Wikipedia. 3 kg parcel