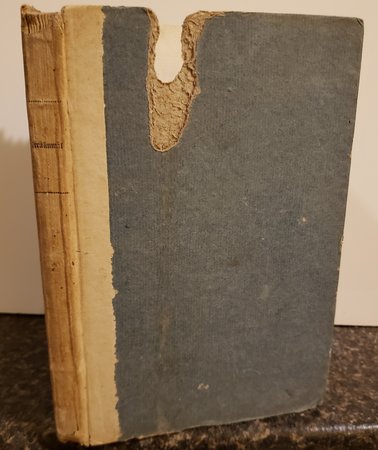 Copenhagen: Jens Hostrup Schultz, 1826. Original boards, with cloth spine with paper label. 152 pp.; colored facsimile and engraved music leaf (printed on both sides), with tissue guard, bound in at the rear. Rather nasty gouge from the top of the front board, with concomitant loss to the half-title (blank area), and including two letters of "Krakas" on the title page; small chip to head of spine; otherwise clean, bright and fresh; unopened at the top edges, hence unread. Old Norse text with Icelandic, Danish, Latin and French translations, Danish notes. "Ragnar Lodbrok ...was a historically dubious Norse Viking hero and legendary king of Denmark and Sweden, known from Viking Age Old Norse poetry and sagas. According to that traditional literature, Ragnar distinguished himself by many raids against Francia and Anglo-Saxon England during the 9th century. There is no evidence that he existed under this name and outside of the mythology associated with him. According to the Tale of Ragnar Lodbrok, Ragnar was the son of the Swedish king Sigurd Ring." - Wikipedia. "Krákumál or the Lay of Kraka is a skaldic poem, consisting of a monologue in which Ragnar Lodbrok is dying in Ælla's snake pit and looks back at a life full of heroic deeds. It was composed in the 12th century, almost certainly in the Scottish islands. It is composed in a kind of háttlausa in 29 stanzas, most of them with ten lines. In moving and forceful language, the poem deals with the joys of the life of a warrior, the hope that his death will be followed by a gory revenge, and the knowledge that he will soon know the pleasures of Valhalla. The poem has been translated into several languages and it has contributed to the modern image of a Viking warrior." - Wikipedia. This is the first complete edition of Krákumál, with the original Icelandic text arranged with a parallel translation into Danish, and a translation into French. Rafn, a distinguished antiquarian, was among the first to insist that Viking travels to America were fact and not myth.; Octavo