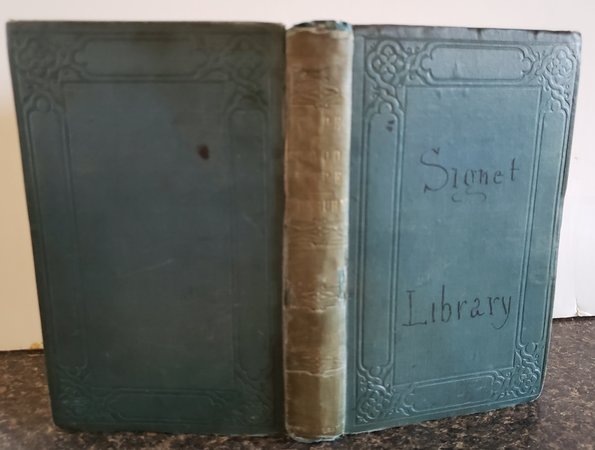 JOURNAL OF A RESIDENCE AT THE CAPE OF GOOD HOPE; with Excursions into the Interior, and Notes on the Natural History, and the Native Tribes

London: John Murray, 1848. Original green cloth. pp xii, 297, (3, ads) + wood-engraved frontispiece and four other plates. From the library of the Writers to Her Majesty’s Signet, so designated on front cover by hand in ink "Signet Library" and also on front pastedown with shelf label. Spine a bit worn at ends, with cloth split to rear joint neatly repaired and two small chips to joints just below centre; wear to one outer corner neatly repaired; neat internal repairs to separations in text; occasional mild text soiling; a little leaned; in all, a good copy, now tight in the binding, text unworn, and looking better than it sounds. An important work on South Africa, with extensive observations on the botany of the region, and an account of the Great Trek of the Boers, then underway. The Society of Writers to Her Majesty’s Signet is a private society of Scottish solicitors, dating back to 1594 and part of the College of Justice. Writers to the Signet originally had special privileges in relation to the drawing up of documents which required to be signeted, but these have since disappeared and the Society is now an independent, non-regulatory association of solicitors. The Society maintains the Category A listed Signet Library, part of the Parliament House complex in Edinburgh, and members of the Society are entitled to the postnominal letters WS." - Wiklipedia. "Sir Charles James Fox Bunbury, 8th Baronet, FRS (4 February 1809 -18 June 1886) was an English naturalist....He was a keen botanist and geologist with a particular interest in paleobotany. He collected plant specimens on expeditions to South America in 1833 and South Africa in 1838. He also accompanied his great friend Sir Charles Lyell, the geologist, on an expedition to Madeira. He was elected a Fellow of the Royal Society in 1851." - Wikipedia.; Octavo