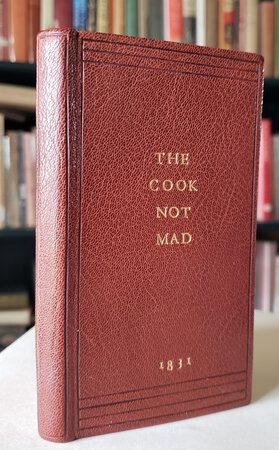 Watertown, NY: Knowlton and Rice, 1831. 24mo, leaf size 13.7 x 7.4 cm. In a nice recent brown morocco binding. front cover gilt lettered including date, covers bordered in blind, new cream endpapers. pp (3, title leaf)-115, 116-20 Index. Text browned, with considerable foxing, typical of American books of this period. Some damp staining, some leaves trimmed close. Paper repairs to bottom margin of first two leaves including to the blank bottom inch of the verso of the title leaf. Page 28 backed with rice paper but text still readable. Despite all, no text has been lost. >>> The title page continues: "Being a Collection of Original and Selected Receipts, Embracing not only the art of curing various kinds of meats and vegetables for future use, but of Cooking, In its general acceptation, to the taste, habits, and degrees of luxury, prevalent with the American Publick, in Town and Country. To which are added, Directions for preparing comforts for the Sick Room: together with sundry Miscellaneous kinds of information, of importance to housekeepers in general, nearly all tested by experience." The second edition, enlarged, of a rare American cookbook. The second edition adds 11 additional recipes, and uses the spelling "yeast" instead of "yest". This little anonymously published cookery book, compiled by an American and pointedly republican so far as food goes, with many recipes for American dishes using American ingredients, is of Canadian interest because the Canadian issue published just across the river in Kingston, Upper Canada (now Ontario) by James Macfarlane in 1831 has the distinction of being THE FIRST COOK BOOK PUBLISHED IN ENGLISH CANADA. The Canadian issue is excessively rare, there being but three known copies , and this US edition is itself a rarity. Lowenstein 127 and 139 records only one copy of the 1830 edition and only two of the 1831 edition. OCLC shows 7 copies of the 1830 edition, 8 of the 1831 edition. There was a third edition in 1841 (108 pp). Not in Cagle, A Matter of Taste. Driver O1.1, the Kingston issue, being the first entry in her masterful bibliography of Canadian cookbooks. This US edition is mentioned in the end note to that record. Violà locates only two copies of the present edition, at Queen's (which also has a copy of the Canadian issue), and the University of Guelph>>> Often called Canada's first cook book, in error, as there was a French language cookery book published in Quebec in 1825. The Canadian issue was made from this edition and is identical but for a title page change to "Canadian Publick". But really, the book pays no attention to Canada, being replete with Good Republican Dishes such as turkey, pumpkin, codfish, cranberries, A Tasty Indian Pudding, Federal Pancakes, Good Rye, Indian (cornmeal) Bread, Johnnycake, Indian Slapjack, Washington Cake, and Jackson Jumbles. The book disses English, French, and Italian dishes, but does in fact include some English fare, the recipes in some cases being cribbed word for word from earlier English and American cookery books. Recipe 298, A Moorish Method of Cooking Beef, is one of the earliest for shish-kebab in American cookbooks. >>> In summary, this is the text read by buyers in Upper Canada in 1831, of the first English language cookbook to bear a Canadian imprint (albeit American sheets). This edition is as close as one can get to the impossible-to-obtain Kingston issue. All the early editions are rare.